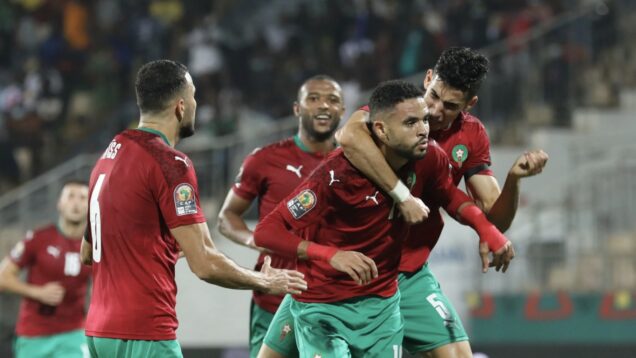 Morocco and Senegal have qualified for the quarter-finals of the TotalEnergies Africa Cup of Nations 2021 in Cameroon.

The Atlas Lions of Morocco also secured a place in the quarter final coming from a goal down to defeat Malawi 2-1 in a match played at the Ahmadou Ahidjo Stadium in Yaounde.

Coach Vahid Halilhodzic’s Atlas Lions started on a high, but it was Gabadinho Mhango who struck early for the Malawi Flames after only seven minutes.

Mhango made no mistake from outside the box when he curled in a shot that beat Morocco’s goalkeeper Yassine Bounou to the top corner.

But the early goal was a wake-up call for the Moroccon team as they responded and attacked in numbers to try and level matters.

Imran Louza and Yousesef En-Nesyri all had their shots blocked by the Malawian goalkeeper Charles Thom who kept his team in the game.

But with two minutes of added time to the break En-Nesyri made it 1-1 when he nodded in a well taken Sofiane Boufal corner kick.

In the second half the Malawi team tried to regroup and made early attempts through Gerald and Phiri Gomezgani Chirwa, but their attempts missed the target.

After a lot of pressure on the Malawian defending line, Morocco scored to make it 2-1 after 70 minutes.

On Wednesday, Ivory Coast will face Egypt and Mali will duel Equatorial Guinea for the remaining two tickets in the last eight.