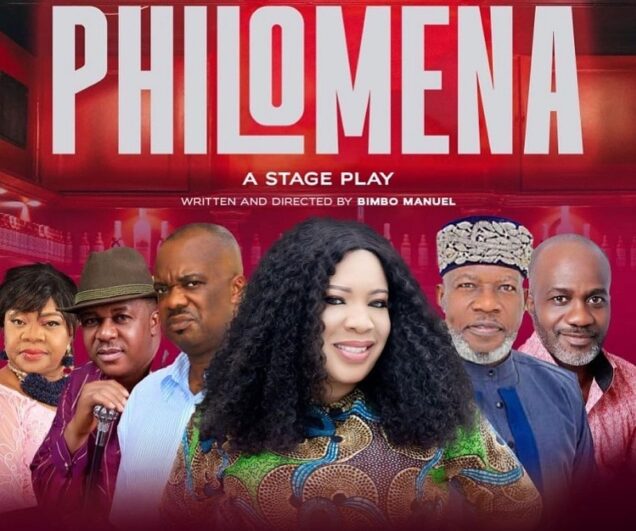 K’Ike Productions Ltd, a theatre-focused production company, is shutting down Port Harcourt, the Rivers State capital from February 11 till 14 February with a stage play, tagged ‘PHILOMENA’.

‘Philomena’ is written by Nollywood veteran, Bimbo Manuel and he doubles as the director of the play.

‘Philomena’ is the story of three characters who find themselves, by pure chance, in the same space at the same time, each with his and her personal issues that they would have carried with them if events do not force them out.

Each character seeks justification for their rage at society, government and life.

The story of the fairly ordered lives of Philomena, a prostitute in her last laps, Area her regular customer, frustrated masters degree holder and primary school teacher is disrupted by the arrival of Wesley, a bombastic journalist with an inflated view of himself when he gets his sack on the phone while sitting in Philomena’s beer parlour for a consolatory drink.

He must get back at society for the ‘injustice of his sack over the phone’.

The rest is a poignant comedy that will get the city of Port Harcourt talking for a while.

According to the writer, Bimbo Manuel, ‘Philomena: Interview With A Prostitute’ cannot be contained in just a book anymore. Like the little acorn, the intensive little play has grown to become a massive star-studded theatrical phenomenon’

On her own part, Monalisa Chinda, who is joint Executive Producer with Bimbo Manuel said, ‘From my first encounter with the play, Philomena, it became a story that demanded to be told.’

The Company has also engaged one of the leading lights of theatre productions in Nigeria, Bikiya Graham-Douglas as Producer and she said, ‘I am happy to be doing this.

‘What is even more enthralling is that it is happening in The Garden City. I believe it is the beginning of greater things to come to our beloved city, Port Harcourt.

‘It is phenomenal that we are bringing Nollywood veterans and homegrown talents together in one performance space in our city. I am happy to be doing this at home in Rivers State.’

The presentation of ‘Philomena’ has been carefully timed for the Valentine’s season to treat lovers in Port Harcourt to a great outing alternative.

The performances kick off on February 11, 2022, at the Atlantic Hall of the Hotel Presidential, in Port Harcourt and there will be a Red Carpet and Variety Edition with fine music and choice dining at the February 14 Special Performance.

‘Philomena Live In Port Harcourt’ is proudly brought to you by Amstel Malta, Rivers State Tourism Development Agency and supported by The Envoy Hotel, Abuja, FourOTwo Entertainment and others.