Fire destroys more than half of Mokwa Market 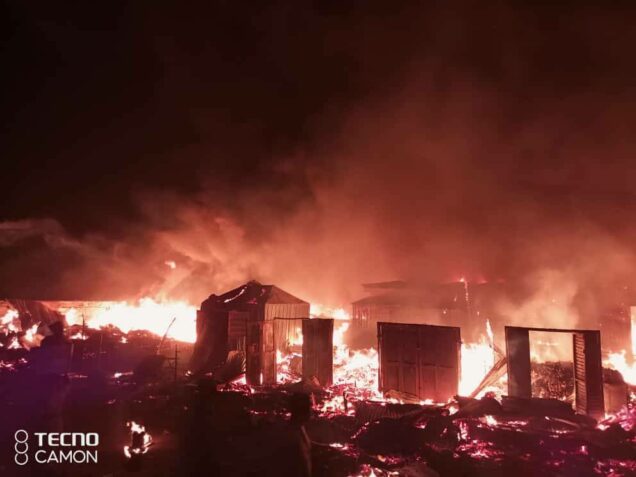 Goods, mostly food items worth millions of naira were on Thursday destroyed by fire in Mokwa Central Market, the Headquarters of Mokwa Local Government Area of Niger State.

No fewer than four people who slept in their shops sustained various degrees of injuries and were taken to Mokwa General Hospital for medical attention.

The Paramount Ruler of the town, the Ndalile-Mokwa, Alhaji Mohammed Shaba said that the fire which started at about 4a.m. razed down more than half of the market.

“The fire started around 4 o’clock in the morning. They called me and I called the fire Service. They have been trying to put off the fire but because of lack of tanks, as I am talking to you, the fire is still on.” He said.

He said some hoodlums also took advantage of the raging fire to steal goods but four of them had been apprehended.

“This is a rural market where foodstuffs are being sold in abundance. And we are a bridge between the north and the south in terms of supply of foods. More than half of the market is gone.”

One of the traders simply identified as Etsu-Kpo Mokwa said traders were counting their losses.

He described the incident as devastating.

“It will take many traders years to recover from this disaster. We are still counting the losses. Fire service officials are still doing their best to put off the fire,” he said.

Bago, who is the chairman House Committee on Cooperation and Integration in Africa said the fire constituted a huge loss not only to the affected traders but to the state at large.