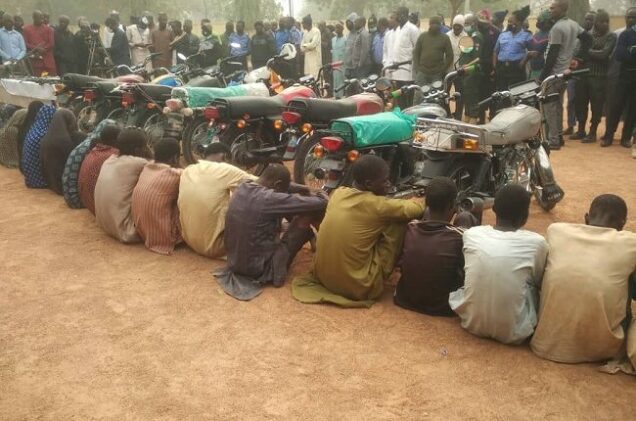 The police command in Jigawa has rescued a 20-year-old lady, Hadiza Chado from kidnappers’ den and arrested 14 suspects in the process.

The Commissioner of Police in the state, Mr Aliyu Tafida disclosed this at a news conference in Dutse on Thursday.

Tafida said the victim was kidnapped on Jan. 8, at Marma village in Kirikasamma Local Government Area of the state.

He said that the victim was rescued unhurt on Wednesday, after the police raided the suspected kidnappers’ hideout in Suletankarkar LGA.

The CP said that the police also raided three criminals hideouts at Dajin Maizuwo, Dan Gwanki and Yandamo villages in the area during the operation.

The 14 suspects comprised 10 males and four females. Two of them sustained injuries as a result of fire exchange.

The CP added that N2.7 million was also recovered during the operation.

He said that two of the recovered rifles were carted away from police officers killed while responding to a distress call on Jan. 23, at Kwalam village in Taura LGA.

Tafida further said that one of the recovered motorcycles belonged to one, Abdu Sajo, a local security outfit commander killed on Jan. 25.

According to him, the suspects will be charged to court as soon as investigations were completed.

He reiterated commitment of the police to fight crime and protect lives and properties in the state. (NAN)