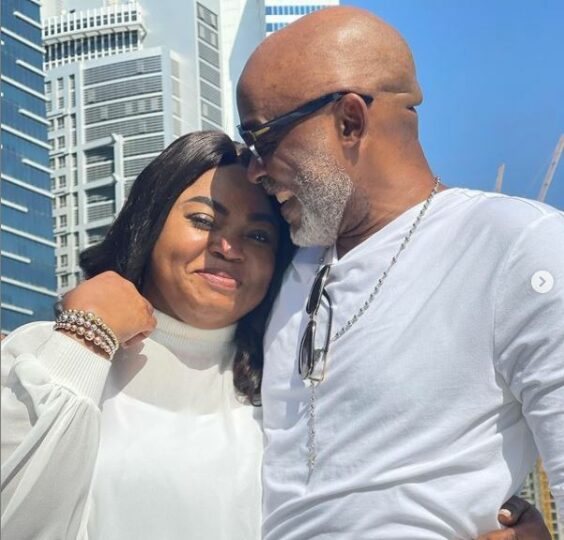 Veteran Nollywood actor, Richard Mofe-Damijo also known as RMD has showered encomiums on his wife, Jumobi Adegbesan on the occasion of her 50th birthday.

The veteran actor posted an adorable video of his wife on Instagram and penned down a heartfelt note as caption.

“A very rare moment, completely out of character. What they won’t let me record, a makeup artist gets for nothing. Journey to the 5th floor, enjoying and owning it has started. Happy birthday my Abike.You are totalling killing 50,” he wrote.

“Happy 50th birthday love of my life. Totally killing the 5th floor. My smallie of that year!”

The couple had celebrated their 21st wedding anniversary in December last year.

RMD and Jumobi got married on December 29, 2000 and celebrated their 21st anniversary in December 2021.

Richard Mofe-Damijo remarried TV personality, Jumobi Adegbesan, who later left TV for the corporate world. after the death of his first wife, Nigerian journalist/publisher, May Ellen-Ezekiel (MEE) in 1996.

Their union has produced five children.

RMD gained prominence for his part in the late 80’s television soap opera titled ‘Ripples’. He has since then gone on to feature in hundreds of Nollywood movies.

Apart from being an iconic screen god, RMD is a seasoned lawyer, journalist, and was the former Delta State Commissioner for Culture and Tourism, while Jumobi is an upper-level executive at Nigeria’s leading telecoms company, Globacom.