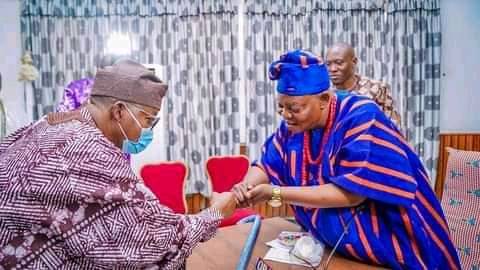 The Orangun of Ila, Oba Abdul Oyedotun and Governor Oyetola

The Orangun of Ila, Oba Abdul Oyedotun, has assured Governor Gboyega Oyetola that his attackers will not defeat him at the 2022 Osun State gubernatorial election scheduled for July 16.

The monarch said this on Thursday during Oyetola’s “strategic tour” of the Ila Federal Constituency Area of the state.

Oyedotun said the achievements of the governor in the development of the state were enough testimonies for him to be reelected.

Oyedotun, who noted that the governor would triumph in the election, said the electorate were behind him.

He said: “Your achievements speak for themselves and we are proud of what you have done.

“Your second term ambition will be successful and whoever tries to stand on your way, will not witness your success story.

“Don’t despair, our ancestors were faced with travails and they emerged triumphantly, you shall overcome yours too.

“Your detractors will witness your success and you will triumph over them.”

However, Oyetola urged the electorate in the state to safeguard their Permanent Voter Cards (PVCs) ahead of the July 16 gubernatorial election in the state.

Oyetola also urged members of the All Progressives Congress (APC) to keep their membership registration slips safely ahead of the party’s primary.

He appealed to them not to allow any individual to deceive them with a ”fake loan” to steal still their PVCs from them.

“I implore you to keep the party’s registration slip issued during the accreditation exercise and your voter’s card safe.

“With the look of things, it seems that the party will opt for direct primary, if it is so, the membership slip will be used for the exercise.

“Some people want to collect your PVC and membership slip with the pretense to give you a loan.

“They are all liars, the loan that they did not give you two years ago, they are lying to give you months to the election.

“They are promising you food now, they are liars. We started our food support program last year April and we did not stop it.

“We are not doing this because we want to get votes from you, but it is because of our genuine love for the people.

“Let us be prepared for the primary election of our party and the gubernatorial election,” he said.