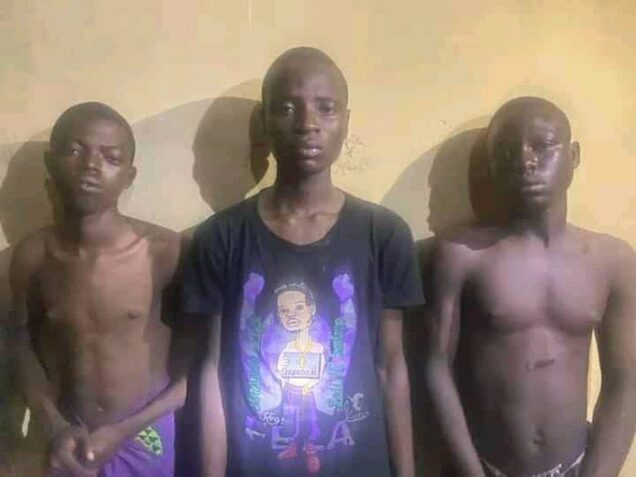 Four teenage boys have been arrested after they were caught burning the head of a girl, said to be in a relationship with one of them, for money ritual in Ogun State.

The incident happened in Oke Aregba area of Abeokuta, the Ogun State capital, in the early hours of Saturday.

One Mr. Segun Adewusi, who is the community security guard, had observed that four boys were burning something suspected to be the human head in a local pot on the road.

It was gathered that the security guard immediately alerted the police at Adatan station, who went to the scene to get three of the boys arrested as one had fled before police arrived.

The slain girl, identified as Rofiat, was a resident of Idi-Ape; she was a girlfriend to one Soliu.

Soliu was said to have lured the girl to his room, where he held her down and asked one of his friends to slaughter her with a knife.

“The arrested suspects were identified as 17-year-old Wariz Oladeinde from Kugba, 19-year-old Abdulgafar Lukman from Kugba and Mustakeem Balogun from Bode Olude, all in Abeokuta.

Soliu was the boyfriend of the girl, he ran away, but was later arrested, a resident told journalists.

“They killed Rofiat, cut her head, packed the headless body in a sack and started burning the head in a pot. They told the police in the presence of a mammoth crowd that they wanted to use it for money ritual.

“The police have taken the body away to a mortuary,” a source told our correspondent on Saturday.

In a video made available to our reporter, Mustakeem Balogun, said, “We wanted to use just her head alone for money ritual. Soliu strangled her and he told me to assist him and we cut off her head.”

”This is our first time,” he added.

The PPRO however said the Commissioner of Police, Lanre Bankole, who described the action of the suspects as height of callousness.

He said CP also ordered the immediate transfer of the suspects to homicide section of the state Criminal Investigation and Intelligence Department “for discreet investigation with the view to arraign them in court as soon as possible.”