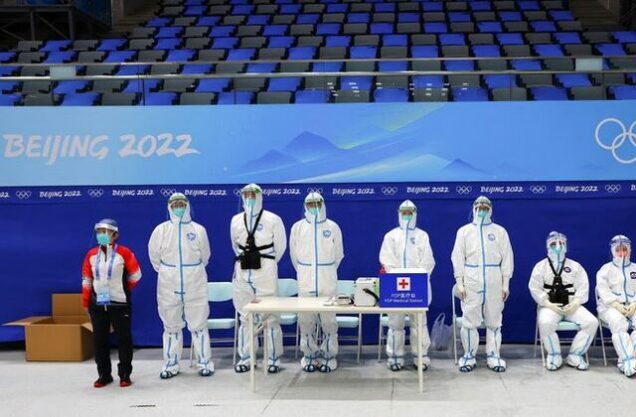 Thirty-six new COVID-19 infections were detected among Olympic Games-related personnel on Jan 28, the organising committee of the Beijing 2022 Winter Olympics said on Saturday.

Nineteen were either athletes or team officials who tested positive after arriving at the airport on Friday.

The daily COVID-19 infections among athletes and team officials jumped to 19 on Friday from two a day earlier, as Games organisers warned of more cases in coming days.

Including the athletes and officials, 36 Games-related personnel were found to be infected – 29 when they arrived at the Beijing airport and seven already in the “closed loop” bubble that separates event personnel from the public, the organising committee said in a statement on Saturday.

“We are now just going through the peak period of people arriving in China and therefore we expect to see the highest numbers at this stage,” the Games’ medical chief, Brian McCloskey, told a news conference.

Organisers are “confident” in their system of COVID-19 prevention, and infections are unlikely to leak out into the public, McCloskey said.

Cases among athletes and team officials exceeded those for “other stakeholders”, including media, sponsors and staff, for the first time since China started releasing daily numbers of Olympics-related coronavirus cases on Jan. 23, according to a Reuters tally of previous statements.

“It’s annoying that every morning you need to get up a little earlier specially to get a PCR test. I think that in a few days, it will be like brushing your teeth,” Russian hockey player Anton Slepyshev told RIA news agency.

“Everyone is concerned that the test result will suddenly turn out to be positive. But the reality is such that we are living with COVID. We accept all the risks and fears,” he said.

The Games are to run from Friday to Feb. 20, its bubble sealed off from the rest of China, where the government’s zero-tolerance COVID-19 policy has all but shut the country’s border to international arrivals.