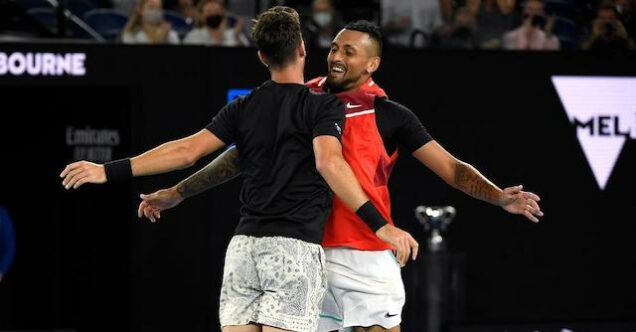 Kyrgios and Kokkinakis, nicknamed the “Special Ks” as juniors, entertained the crowd at the Rod Laver Arena with a 7-5 6-4 victory under the lights.

It was a first doubles triumph for the pair at a Grand Slam and they also became the first wildcard team to win the Australian Open men’s doubles title in the professional era.

A backhand from Kokkinakis sealed the first break of the match in the 11th game and the duo closed out the opening set on their service game as the fans imitated Cristiano Ronaldo’s famous “Siuuu!” goal celebration to cheer the duo.

The duo took a 4-3 lead in the second set after breaking to love before they had a match point denied by their opponents at 5-4.

The pair finally wrapped up the match on serve, with Kyrgios blasting two aces as they won the contest in 95 minutes.

Kyrgios and Kokkinakis enjoyed a dream run at the tournament, where they stunned top seeds Mate Pavic and Nikola Mektic of Croatia in the second round.