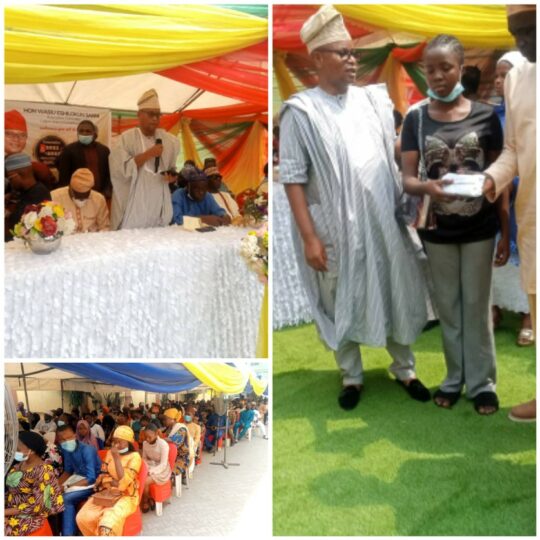 Wasiu Eshinlokun-Sanni, the Deputy Speaker of the Lagos State House of Assembly, has awarded scholarships worth N100,000 each to 55 indigent undergraduates in Lagos Island Constituency 1.

The Deputy Speaker empowered the indigent undergraduates at the 10th edition of the Hon. Wasiu Eshinlokun Sanni scholarship award held at the Lagos Island Local Government Council on Friday.

Speaking at the event, Eshinlokun said the 2022 scholarship scheme is intended to give life through education.

The Deputy Speaker said he is convinced beyond reasonable doubt that effective education will solve if not all social challenges.

He also opined that if he had not been educated he may not have become the Executive Chairman of Lagos Island LG and Deputy Speaker of the Lagos State House of Assembly.

On that note, he urged the beneficiaries to not be deceived that education is not important as successful people who were children of nobody now are well to do in the society.

He reiterated the words of Alhaji H.O. Sodeeq who posited that the Lagos Island LG APC party leaders have discussed and agreed that HND will be the minimum academic requirement for aspirants contesting for LG chairmen and councillorship positions starting from 2025 LGA elections.

Eshinlokun however charged the education committee, that picked the 55 beneficiaries, to set up a monitoring team that will follow up the academic progress of the beneficiaries.

The Deputy also Speaker promised to dish out the sum of #50,000 as consolatory prizes to those who did not pass the test set by the Education committee.

However, Hon. Moshood Maiyegun, the deputy chairman of APC Lagos state, in his goodwill message urged the Education committee of the scholarship to include the Permanent Voters’ Card (PVC) as an important part of the requirements for applying for the scholarship award.

One of the beneficiaries, Alaka Taiwo Hassanat, a 200L student of Lagos State University, said:

“I’m excited and as well grateful for the opportunity to have been granted this scholarship award. It means a lot to me and definitely I am going to put it to good use. I implore other beneficiaries to put the funds to good use. I say a big thank you to the Deputy Speaker for making this happen.”

The mother of Hassanat who also spoke to journalists said: “I so much appreciate the efforts of Hon. Wasiu Eshinlokun and I pray that God continues to bless him so that the students can continue to enjoy this award.”

Ajasa Ayomide, another beneficiary of the scholarship award, said: “This will go a long way in helping me with my tuition and hostel fees including handouts. I urge the beneficiaries to use the funds for the purpose it was set out for.”

Maja Raimot Folashade who also benefitted said: “With the current financial situation in the country, the scholarship award will be a big financial relief for the parents who are thinking of paying tuition fees, handouts, and hostel fees of their wards.”

So far over 500 students have benefited from the Wasiu Eshinlokun Sanni scholarship award since its inception.