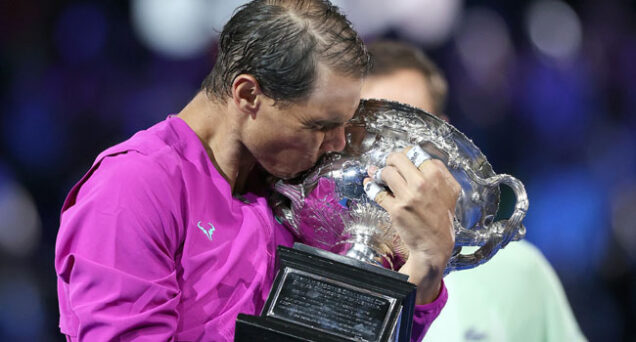 Roger Federer and Novak Djokovic hailed the epic performance of their eternal rival Rafael Nadal on Sunday after he claimed a record-breaking 21st men’s grand slam at the Australian Open.

Federer, Djokovic and the Spaniard had been tied on 20 slams apiece before Nadal downed Russia’s Daniil Medvedev in a five-set thriller at Melbourne Park.

“What a match,” Federer wrote on Instagram. “To my friend and great rival Rafael Nadal, heartfelt congratulations on becoming the first man to win 21 grand slam singles’ titles.

“A few months ago we were joking about both being on crutches. Amazing. Never underestimate a great champion.

“Your incredible work ethic, dedication and fighting spirit are an inspiration to me and countless others around the world.

“I am proud to share this era with you and honoured to play a role in pushing you to achieve more, as you have done for me for the past 18 years.

“I am sure you have more achievements ahead. But, for now, enjoy this one!”

Switzerland’s Federer, now 40, may struggle to find the form and fitness to win another slam as he recovers from his late knee surgery.

Serbia’s Djokovic, the world number one, faces different challenges in spite of being a year younger than the 35-year-old Nadal and seemingly in the best health of the trio.

He was deported from Australia before the Open began having not been vaccinated against the coronavirus.

This can also hamper his entry to the French Open —- where Nadal has won a record 13 times —- as France also require vaccinations for entry into the country.