Onyeka Onwenu reveals what kept her going despite challenges 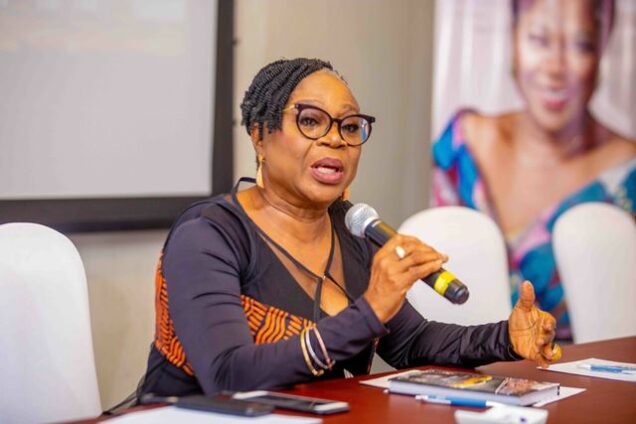 Nigeria’s popular musician Onyeka Onwenu, whose music ruled the airwaves in the 1980s, 1990s and 2000s, defies description and she wears many caps.

She is not just an artiste who sang many hit songs such as “One love”, “Wait For Me” and “Iyogogo, she is also a journalist, award-winning actor, politician, author and a strong advocate for women’s rights.

Still, not done with her numerous achievements and giant strides in many fields of endeavour, she added another cap when she released her memoir, My Father’s Daughter on I October, 2020, Nigeria’s independence day, which was symbolic enough.

The memoir, My Father’s Daughter, a provocative book, chronicles Onwenu’s life as a musician, activist, wife, mother and politician. A riveting narration of her journey through life, the ups and downs, the thrills and frills, she vouchsafes us glimpses into her world, “from the heart-warming affection of her father to living through the anguish of the Nigerian civil war, from remarkable mothers love to family intrigues, from feminism to a career that has put her in the limelight for decades.”

However, Onwenu is taking another giant stride, as the memoir is about to be adapted into a mini TV series. She made this known on Friday, 28 January, 2022. Guests who were present at the event included Nollywood actor Nse Ikpe-Etim, popular singer Yinka Davies, and movie producer Teco Benson. Prof Bankole Shodipo,, Susan Hedef, Chief Edwin Igbokwe, Betty Ijeoma (nee Mbadiwe), Azuh Arinze and Sonny Allison were present.

It was an afternoon of tributes, humour and fun, remembrance of things past, networking, book reading and presentation as well as music. In her speech, Onwenu noted that the book was written based on her Christian ethics.

“I write according to my Christian ethics. I don’t write to malign people. When I thought I was done, the Lord gave me another chapter. I write to educate, entertain and tell the truth. That is why I called out names in my book. I bow when I hear that someone is a writer because it is not easy. If you want to write a memoir, tell the truth.

“Some people have said so many things about me without meeting me. However, I have learnt to be myself and be comfortable in my own skin. They said I was everywhere singing, acting, getting involved in politics, and now, I am even writing. I will continue to do what God wants me to do,” she averred.

Still, it hasn’t been an easy ride in the park for the artiste. Not only did she lose her father, the educationist and politician D. K Onwenu, when she was four years old in an auto crash a week before his appointment as Minister for Education, she has fought many battles in life, one of which was in 2000, when she protested against her former employer NTA over their refusal to pay royalties on her songs in station idents without asking her permission.

NTA blacklisted her from transmission (though NTA denied it) and she embarked on a hunger strike outside the station’s premises for days. She has also been a very strong and unapologetic voice for women’s rights and also has been misunderstood and maligned for her activism.

Asked at the media parley what has kept her going, Onwenu hinged it on her sense of purpose and what God had sent her to do on earth. “That God had work for me to do. That I came here not just to have fun, become rich and everybody knows you. But you have a sense of purpose. There is a job for me to do in Nigeria. That’s why He sent me here. And that’s why I am still here. So that keeps me going.

“It may not be one. It may be several. So if you finish this one, He is giving you another opportunity and you follow through. And if people can come back to me and say oh I have been influenced by what I read in your book, I am very happy. Even if it is my failure. Because it is not the book where I am praising myself or say, oh look at me, I am such a wonderful person. No. We talked about the nitty-gritty and the things that a young woman growing up has to deal with. Even if somebody in your family is telling you why don’t you go to Abuja and go and find rich boyfriends so we can make money. It is all in there. That’s how real it is,” she maintained.

Singer and voice coach, Yinka Davies, who alongside Ngozi Osu the editor and Nse Ikpe-Etim, read excerpts from the book, noted that she had a longstanding relationship with Onwenu, and praised the latter for being able to do different things at the same time.

Chief Edwin Igbokwe, the pioneer General Manager of Punch, narrated how Olu Aboderin was instrumental to his marrying legendary singer Christy Essien Igbokwe, who he was initially reluctant to marry because of the role she had played in the popular television series, Village Headmaster.

Onwenu described Essien-Igbowe as an incredible company and brilliant woman who took the entertainment industry by storm at a time women were afraid to do what she did. “You cannot talk about the Nigerian music industry and not talk about Christy Essien- Igbokwe,” she said.

Igbokwe also spoke about how when his wife died twelve years ago, Onwenu convinced Ifeanyi Ubah to donate one million naira to his family. “I just want everybody to know that if you consider Onyeka your friend, you are wasting your time because she means realities. Realities is one of her names. She wouldn’t allow anything between two of you to intervene in any credit she wants to give to you,” she said.

Yinka Davies, on her part, was full of praise for Onwenu. “Aunty is mean if only you see her as mean. Then you will decide never to ever talk to her. Aunty is not afraid to apologize. That in itself is scary. To me, the biggest mistake we ever made in Nigeria is not allowing her to run the NTA… Because of her I am more like Aunty Christy Essien, loud in Lagos but silently I love the fire, the anger, the rage. And I want to ask her how have you coped Nigeria, these fifty, sixty years on,” she said.

To which Onwenu replied: “Have I coped? I am not sure. We all cope and we can. It’s hard, painful because you are misunderstood, maligned. Like you said a lot of people I have never met me they decided what I am. And the first thing they do is to snub the hell out of me. And I have come to enjoy it. Because me I know that when God begins to reveal me to you, you’re going to be shocked

“Don’t explain yourself ( I am talking to every one of us). Don’t bother. Be yourself, love yourself, be comfortable in your own skin and keep going. I am tough. But I am also very soft. And sometimes we are tough because we are protecting the soft sides because that get easily hurt,” Onwenu revealed.

Nse Ikpe-Etim narrated how she was in awe of Onwenu when she met her for the first time. She also spoke about how she met the artiste again last year. She described her as an enigma. “I am in front of an enigma and she said I am doing a great work. I am wondering you can’t say this thing about me. You shouldn’t be saying that. I had make-up on and I kept saying to her please don’t say anymore. I didn’t know how to take it or how not to take it. But I am thankful to be with her here. This is a dream come true,” she said.

Betty Ijeoma, daughter of late flamboyant and legendary politician and statesman K.O Mbadiwe who came with her daughter, Nneka, spoke about how proud she was of Onwenu who she described as beyond a role mode and an enigma who doesn’t know she is one. “One thing I will never forget in my life is that this lady carried my child and said I will sing on your wedding day. And do you know what? Onyeka came and sang in South Africa. That is who Onyeka is.

“Onyeka made my parents proud and the people of Arondinzwogu. I am very proud to say Onyeka is my sister. Arondinzwogu people you could see are happy to be associated with Onyeka.

Describing her as multi-talented and a highly educated woman as well as a great actor who is very loyal, she said: “Onyeka doesn’t have enemies. The thing about her is that she is very direct. She doesn’t have enemies.” She also described Onwenu as a renaissance woman.

Azuh Arinze, on his part, spoke about how he had known Onwenu whom she referred to as his aunt for a very long time and how she impacted his life in so many ways. The first time he met her was when he interviewed her as a young reporter. But unfortunately for him he later realized to his chagrin that the interview didn’t record. In a fix, he initially couldn’t summon up the courage to go back to her to ask for another interview. But when he eventually did, he wrote a letter to Onwenu, dropped it in her office and sprinted away. But after Onwenu had got the letter and read it, she called him back and granted him another interview.

Izu Chukwu, a filmmaker and the Director of the TV Series, in a terse speech, said he had idolised Onwenu growing up and he loved her music. He also said the fact that he was invited to be part of the project was a big privilege, adding that he was just an observer at the event. When Onwenu asked him which of his works he thought was the greatest, he said it was difficult for him to answer that. “For me, I can’t tell,” he said succinctly.

Ojukwu, who is famous for projects such as ‘Amina’ and ‘76’, will direct the series; while Onwenu and Chichi Nworah will serve as Executive Producer/Writer and Producer respectively. Nworah is also famous for works such as Shanty Town and Omoge Suzzy.