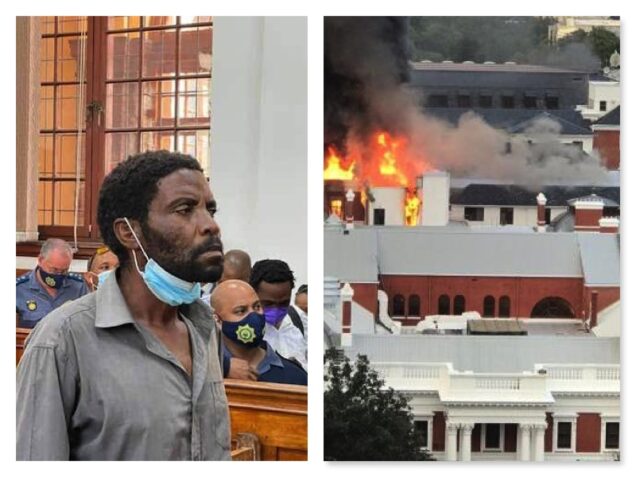 The suspected arsonist of South African Parliament early this month allegedly used boxes, paper and petrol worth 10 rands, about 64 U.S. cents, to start the fire.

The National Prosecuting Authority (NPA) of South Africa made this known in a statement on Sunday.

Zandile Christmas Mafe, the suspect, “purchased petrol in a bottle, made his way to Parliament, using stealth, broke into Parliament and after spending some time in Parliament, used boxes, paper and the petrol to set parliament alight causing devastating damage to the facility,” said the statement.

The 49-year-old, who is charged with housebreaking with intent to commit terrorism and arson, terrorism, arson and theft, could face life imprisonment if convicted.

While Mafe pleaded not guilty, an affidavit of an investigating officer submitted by the prosecution said Mafe had confessed that he committed to the crime because he wanted South African President Cyril Ramaphosa to resign with immediate effect.

He demanded the release of Janus Waluz, a convicted murderer in the assassination of former South African Communist Party leader Chris Hani in 1993.

The parliament fire starting in the morning on Jan. 2.

It lasted more than 70 hours, severely damaging the building of the National Assembly (NA), the lower house, and completely burned down the NA chamber.

It also caused extensive damage to the century-old Old Assembly building that houses the National Council of Provinces, the upper house.

The affidavit said Mafe appeared to be pleased with himself after he was shown a video clip of the burning parliament and voluntarily pointed out a petrol station where he purchased petrol for 10 rands, as well as the gate and window he used to enter the parliament.

Bail judgment will be delivered on Feb. 4, according to the statement.

The fire forced the parliament to move its flagship program, the State of the Nation Address, to be delivered by Ramaphosa on Feb. 10, from the NA chamber to the historic City Hall of Cape Town.