46 Facts about A$AP Rocky, the rapper who got Rihanna pregnant 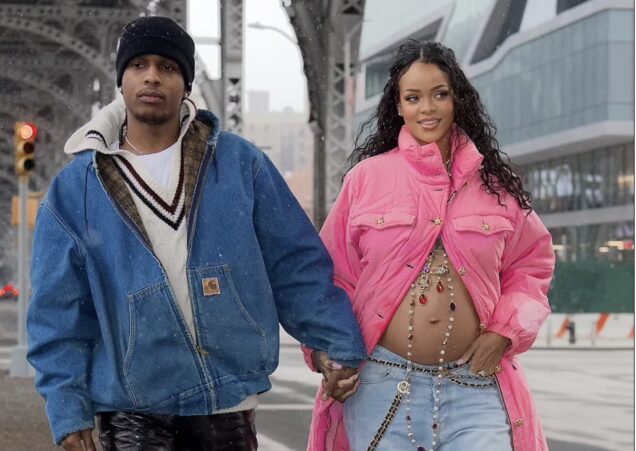 Popular Barbadian singer, actress and fashion designer Rihanna is pregnant with American rapper A$AP Rocky’s child. The singer debuted her baby bump while out in New York over the weekend with the rapper.

Rocky, arguably the Bad Boy of American entertainment industry, once told GQ about his romance with Rihanna, calling her the “love of my life.”

When asked what it felt like to be in a relationship, he said, “So much better. So much better when you got ‘the One.’ She amounts to probably, like, a million of the other ones. I think when you know, you know. She’s the One.”

Here are 46 facts about Rocky,

1. He was born Rakim Athelaston Mayers on 3 October 1988, in the Harlem neighbourhood of Manhattan.

2. His father is from Barbados, the island where Rihanna hails from.

3. He started rapping at age nine, when he moved to Harrisburg, Pennsylvania.

4. He learned how to rap from his older brother, who also wore the Hair twists hairdo that Rocky later adopted.

5. When he was 12 years old, his father went to jail in connection with selling drugs.

7. When he was 13, his brother was killed in Harlem. The death inspired Rocky to take rapping more seriously.

9. He spent his teenage years selling cannabis and crack while moving around homeless shelters with his mother and sister.

11. In 2006, Mayers served two weeks in Rikers Island for drug dealing, where he shared a cell with future rapper Casanova.

12. In 2007, he joined the A$AP Mob crew, a Harlem-based collective of rappers, producers, music video directors, fashion designers, and bikers who shared similar interests in music, fashion, style, and art.

13. In August 2011, his single “Peso”, was leaked online and within weeks received airplay on the high-profile Hot 97 New York radio station.

14. After he released a music video for his song “Purple Swag”, he received attention from several record labels.

16. Earlier that month, he signed a two-year, $3 million record deal with Bryan Leach’s Polo Grounds Music, which at the time was distributed by Clive Davis’ Sony Music division of J Records.

17. Upon his record deal, Rocky started a label, A$AP Worldwide, with A$AP Yams, which was shortlived because on 7 October, RCA Music Group announced that it was merging J alongside Arista and Jive Records into RCA Records

19. On 15 January 2015, seventeen days after the release of his single Lord Pretty Flacko Jodye 2, his mentor and partner, Steven “A$AP Yams” Rodriguez, died at the age of 26.

20. While some reports later stated that Yams’ died of ruled acute mixed drug intoxication, he and several A$AP Mob members and affiliates said the late leader of the collective died due to his sleep apnea, which caused asphyxiation and pulmonary aspiration.

22. On 19 July 2012, he was arrested after his alleged participation in a brawl that took place in downtown Manhattan involved a 21-year-old artist named iRome.

24. On May 19, 2021, Rocky revealed during an interview with GQ that he is in a relationship with Barbadian singer Rihanna, describing her as “the love of my life”.

25. Though the two were first linked in 2013, after Rocky opened up for Rihanna’s Diamonds World Tour.

26. On 31 January, 2022, People magazine reported that the couple is expecting their first child.

27. He was a pescetarian. In 2012, he transitioned to a vegetarian diet with the help of his vegan manager after learning the horrors of the poultry industry.

30 In December 2019, an alleged sex tape featuring Rocky was leaked.

31. Though raised in a Christian home, he once said he does not like going to an organised church, and instead has “[his] own relationship with God… “ I pray every day before I go to sleep,” he said.

32. In July 2012, he was sued for allegedly violently attacking an innocent man after being spotted doing illegal drugs in a clothing store in New York.

33. He was later arrested for assaulting two amateur photographers who took photos of the incident. That incident ended with a plea bargain where he plead guilty to grand larceny for trying to take their cameras.

34. On August 31, 2013, A$AP Rocky allegedly slapped a woman during the Budweiser Made in America Festival. He was charged “with misdemeanour simple assault, a class two misdemeanour”. The case was dismissed after a witness failed to appear in court.

35. The woman later filed a lawsuit in July 2014, asserting that she still suffered certain conditions as a consequence of the alleged assault. Rocky stated that he never touched the woman in question and that she “should have known that there could be trouble in place with so many people.

37. In 2016, A$AP Rocky was involved in a fistfight in New Zealand after refusing to let a man board the elevator he was on.

38. In January 2019, A$AP Rocky was involved in a scuffle in Toronto. A video shows him holding a bottle while barking at a man kneeling on the ground while holding his face.

39. In July 2019, A$AP Rocky was arrested initially for aggravated, then for simple assault in Stockholm, Sweden, after an altercation in the street against a man named Mustafa Jafari and another person that involved A$AP Rocky and three of his entourage on 30 June.

40. Jafari was beaten, kicked, and cut with broken bottles when down on the ground. He suffered several cuts, requiring stitches, and a fractured rib.

41. Rocky later uploaded two videos of the incident to Instagram.

42. He was visited by personnel from the US embassy shortly after his arrest. Several US artists called for a boycott of Sweden due to the incident. A petition to release him was started.

43. Many influential Americans including then First Lady Melania Trump and Kanye West asked Trump to get involved in Rocky’s case, with assistance from the State Department. Trump thereafter tweeted “Just spoke to @KanyeWest about his friend A$AP Rocky’s incarceration. I will be calling the very talented Prime Minister of Sweden to see what we can do about helping A$AP Rocky. So many people would like to see this quickly resolved!”

46. As Rocky had already served over a month in jail for the incident before the sentence was handed out, it was determined that he did not need to serve any additional time.