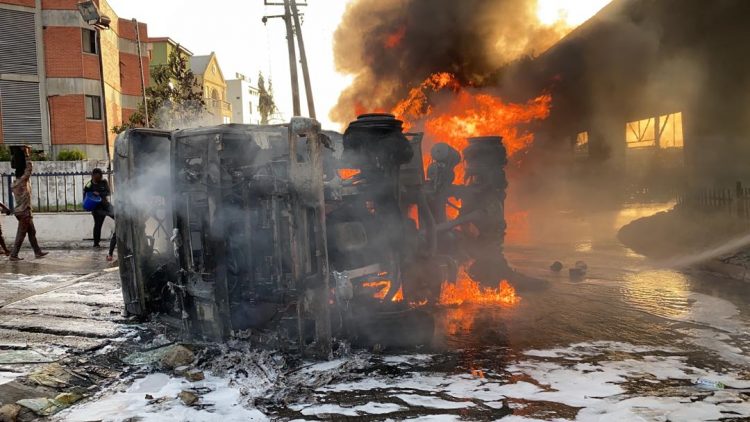 Two persons have died in a tanker explosion on the Lagos-Ibadan Expressway, the Ogun Command of the Federal Road Safety Corps (FRSC) reports.

Mr Ahmed Umar, the Sector Commander of the FRSC told the newsmen that the accident occurred at about 6.05 a.m. near CDK Company.

He explained that tanker, with no registration number and laden with Premium Motor Spirit (PMS), was inbound Lagos-Ibadan Expressway when it exploded some few kilometres after the Sagamu interchange.

“Eight male adults, three vehicles and a Bajaj motorcycle, were involved in the unfortunate incident,” he added.

Umar said that two persons died, while six other persons came out unhurt from the accident.

“The corpses of the dead have been deposited at Idera Morgue, Sagamu,” he said.

According to him, excessive speeding on part of one of the truck drivers was the cause of the accident and explosion.

He said that the inferno had been put off by firefighters and traffic has also been diverted to ease the free flow of traffic.

Meanwhile, the FRSC boss implored motorists to cooperate with the FRSC personnel and other sister agencies to reduce the time being spent in the gridlock.

He further enjoined motorists to drive cautiously and adhere strictly to traffic rules and regulations.