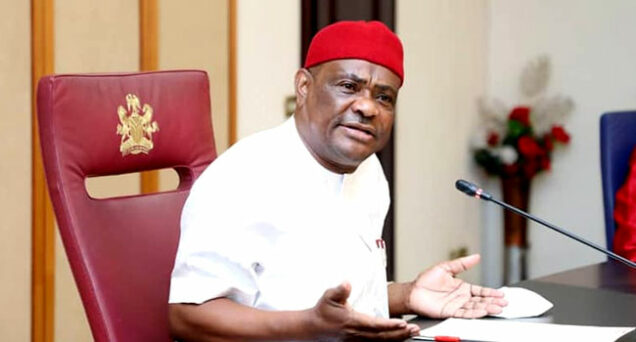 Governor Nyesom Ezenwo Wike has alleged that his predecessor, Rotimi Amaechi refused to formally hand over to him in 2015 because of his plan to convert Rivers State owned air crafts and other valuable assets to his personal possession

Wike who stated this while briefing political stakeholders at the Government House, Port Harcourt on Tuesday therefore challenged those who served in the Amaechi’s administration with contrary view to present documents that there was no plan to convert Rivers State assets to personal possession.

Speaking on the Legacy 600 jet he claimed he recently recovered in Munich, Germany, Wike recalled that recently some Rivers indigenes went to a radio station in Port Harcourt to challenge the State government to give account of the gas turbine, helicopter, the jet and Dash 8 propeller air crafts purchased by the administration of former governor, Dr Peter Odili.

Wike said to allay their concern, he had to travel to Munich, Germany with some leaders of the State with the intent to recover the Legacy 600 air craft abandoned there since 2012 by the Amaechi led government.

Wike recalled that while Amaechi was governor he had written a letter in July 2011 to the State House of Assembly seeking approval to trade in the abandoned aircraft in Germany in order to buy the Bombardier Global Express.

According to him, Amaechi bought the latter but never traded in the Legacy 600 aircraft.

“The whole essence of why they took the plane to Germany, was because the former governor felt that he was going to install a governor in 2015. If Dakuku (Peterside) had become governor that was the end of the plane. That was just the whole essence, because he felt Dakuku must be governor and to the glory of God he did not become…that is why the plane is coming back latest the end of March this year.”

He disclosed that though the State government had been able to discover and is in the process of recovering the Legacy 600 from Germany, there is still no trace of the Dash 8 propeller aircraft purchased by the Odili administration. According to him, the last time anyone heard of the Dash 8 plane was when Amaechi told the then State Executive Council that he won’t sell it to Chief Victor Odili, who had offered to purchase it at the cost of $5 million.

“Chief Victor Odili offered to buy Dash 8 at $5 million. In the Executive Council, the governor (Amaechi) said no, that he had a better offer and the better offer ($6million) is from Cross River state, when Liyel Imoke was the governor of the State and that he wanted to use it for the Obudu Ranch. Out of that $6 million, Liyel had paid N100m as deposit. Up till now, where is the balance? Where is our Dash 8? If they sold it to Cross River state, where is the balance? Asset that ought to be documented and handed over to who is coming in.”

Wike explained that the Amaechi’s administration cared less about assets owned by the state it failed to renew the contract between Rivers State Government House and Aero Contractor to manage the helicopter purchased by Odili’s government.

According to him, Aero contractors used the helicopter for years without paying the State until his administration had to take possession of the asset during the Covid-19 lockdown.

He also accused his predecessor’s government of selling the State gas turbine without due process to their cronies and diverting the funds.

“The gas turbine was sold even without due process at the cost of $308 million. This money was paid in December 2014 when they were doing their APC national convention. I came into office 29th May, 2015, and what was left in the account was $208,000. From $308m to $208,000 within six months. The statement is there. How did $50 million move back to Sahara (Energy). Sahara bought the gas turbine. $50m again left our account to Sahara.”

Governor Wike said the State government had began the prosecution of Saipem for fraud.

He stated that the Amaechi administration had awarded contract to the Italian company to build the Afam station at the cost of $130m. And despite being paid the $130 million and additional N7 Billion, Saipem had failed to deliver the project.

The Rivers State governor, who took a swipe at Amaechi’s former Commissioner for Transport, George Tolofari for claiming that there exist documents that the Legacy 600 was flown to Germany, said such a person with questionable character should not comment on state matters.

“Under Sir Dr Peter Odili’s administration he (Tolofari) was given the job of building the Bonny-Bille jetty, he ate the entire money, N90 million as at then. So, if I was vindictive I would put him in prison.”