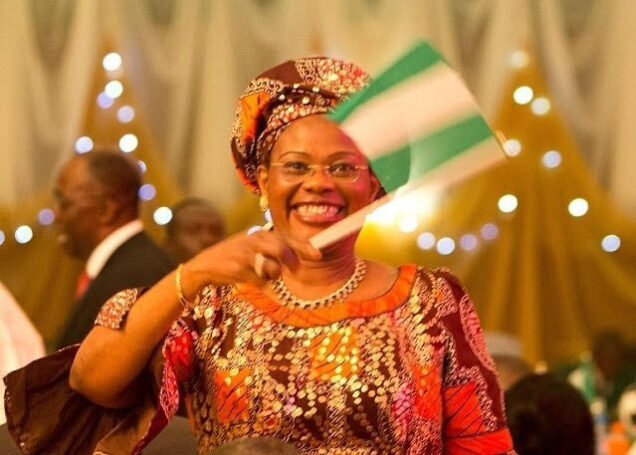 Chidiogo Akunyili-Parr, a Nigerian author, has penned down an intimate memoir to honour the memory and inspirational life of her mother, late minister, Prof. Dora Akunyili whose life and legacy inspired millions by facing down misogyny and battling corruption in Nigeria to a standstill.

Chidiogo’s book which was released in January 2022 is now available in bookstores across Nigeria from Friday, February 4, 2022 under the title ‘I Am Because We Are: The Story of Dora Akunyili.

Told in her voice, from the personal lens of her daughter, this is the story of what shaped her to the woman she was.

Inspired by the African philosophy of Ubuntu — the importance of community over the individual — the book gives an in-depth view of how Dora Akunyili took on fraudulent drug manufacturers whose products killed millions, including her sister.

It explores how Dora, a woman in a man’s world, became a cabinet minister, but had to deal with political manoeuvrings, death threats, and an assassination attempt for defending the voiceless.

But beyond this, the book explores the fullness behind the woman known as the Amazon.

In the authors’ word’s in describing the book, “while the world saw Dora Akunyili at the peak of her strength — a warrior with a gap-toothed smile whose light-skinned oval face was crowned with a colourful head-tie that doubled as armour against incessant attacks against her values and also her life — I saw the complexity that was hidden from sight. This is the story of her multiplicity: the story of my mother.”

“I have spent much of the last four years dedicated to bringing her story to life in this memoir — each step in researching and writing her story has allowed an unwrapping of her — the girl, the daughter, the dreamer, the wife, mother, warrior — her motivations, her struggles, and celebrations.

“The result is this book, a story of a woman I called mother – the woman so many, myself included, knew but a part of. This is the coming together of her parts. I am happy to share this story that it might inspire the whole” said the author, Chidiogo while speaking about the book.

I Am Because We Are illuminates the role of kinship, family, and the individual’s place in society, while revealing a life of courage, how community shaped it, and the web of humanity that binds us all.

The book which is published in Nigeria by Safari Books Ltd will available for purchase on major physical and online bookstores platforms worldwide from the second week of February 2022.

Speaking about the book, Oby Ezekwesili, former minister of education, said; “It is truly uncanny to pull the feat that Chidiogo did with this book. She successfully entered into the full character of her mother and convinces the reader that Dora is the one speaking. This emotional tour de force her daughter Chidiogo wrote has secured the eternal legacy of Dora like no other book can.”

“Get this book. No. Get two of this book so someone else gets the blessing of reading the story of a family that Nigeria and the world can never forget.”

Chidiogo Akunyili-Parr is a Nigerian Canadian author, speaker, and consultant with a passion for human development and connection.

She is the founder of She ROARs, an organization committed to coaching women of colour around the world to connect to their intuition and purpose.

Her work is focused on harnessing the power of our interdependence with a foundation in the humanist African philosophy of Ubuntu, which celebrates our shared humanity.

Chidiogo has lived and worked across four continents and speaks seven languages, including Mandarin, German, Spanish, and French, allowing for an even deeper connection with people.

She led the growth and impact of the Global Shapers Community across Africa and the Middle East.