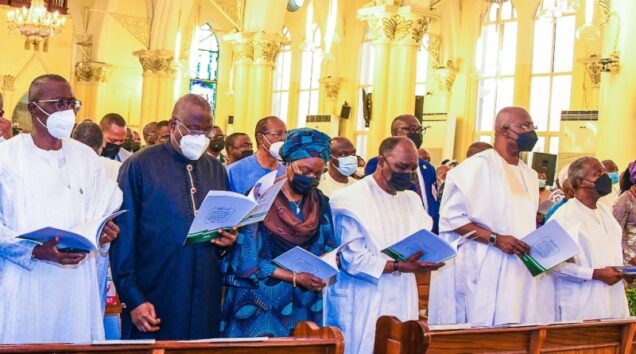 The trio and others were present at the funeral ceremony held for Shonekan at the Cathedral Church of Christ, Marina, Lagos.

The former interim president was later buried at Ikoyi Vault.

At the funeral service, Osinbajo said Shonekan’s love and generosity, not just to his family but to all, was felt by all.

He said his counsel that he provided always with unfailing humility and courteousness were unique virtues that underpinned his selflessness.

According to him, Shonekan lived a life lesson for the nation that he left behind.

“Today, we stand in the light of this great man. The inevitable transition of the people that we love gives us a sombre opportunity to look into the life that they led, and in that light, checkmate our own lives,” he stated.

Osinbajo added that in the last chapter of Shonekan’s life, he assumed the mantle of an elders statesman, as he was supportive of all governments and gave his advise far above the trenches of partisanship.

He said Shonekan was consistently calm and dignified and that he was a steady voice of national counsel to all who sorted him out.

Earlier on Thursday night during the Wake-keep and night of tributes,  Sanwo-Olu, said generations of Nigerians would remain appreciative of Shonekan’s courage, sacrifice and stabilizing influence on the polity.

He said Shonekan, in his calm and unflappable manner, steered the course of the country, during his tenure as Head of the Interim National Government until the military intervention that followed, nothing that it was a courageous thing for him to do, at such a turbulent time in  Nigeria’s history.

“Nigeria has lost a truly great man, a true leader and visionary, a man whose immense success in life did not alter his essential humility and goodness.

“The flood of tributes in the wake of Chief Shonekan’s passing attest to the kind of human he was. You can also look around at the caliber of persons who have gathered here this evening, in his honour,” he said.

Sanwo-Olu while speaking on the legacy of the deceased told the widow of the former Head of Interim National Government, Mrs Margaret Shonekan, his children, grandchildren, and the entire family, to know that “his place in our hearts will never be diminished.”

The Head of the Federal Government delegation, Mr. Boss Mustapha, who is the Secretary to the Government of the Federation, described late Shonekan as a highly principle man and father of the nation.

He said Shonekan was passionate about Nigeria, disclosing that the former Head of Interim National Government, who always attend the Council of State meeting, attended the last meeting on a wheelchair, which showed his level of passion and dedication to the wellbeing of the nation.

In his tributes, Ogun State Governor, Abiodun, said Nigerians remained grateful to Shonekan for the stabilizing roles he played at the most trying period in the country’s polity.

“As Governor of his (Shonekan), I am pained that we have lost an elder statesman. We should take solace in the proud legacy he left behind,” Abiodun said.

In his exhortation during the Wake Keep Service, the Archbishop of Lagos Province and Bishop of Lagos Diocese Anglican Communion, Most Revd. Humphrey Olumakaiye, described late Shonekan as a “Prince and great man in Nigeria.”