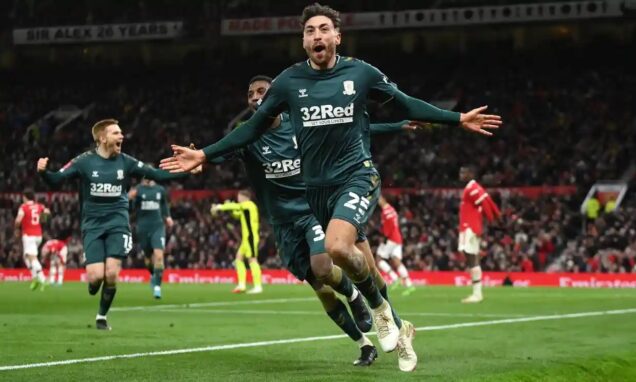 Middlesbrough have knocked out Manchester United in the fourth round of the FA Cup, winning 8-7 in the penalty shootout.

United had led with a goal by Jadon Sancho in the 25th minute, after Cristiano Ronaldo missed a penalty five minutes earlier.

However, in the 64th minute, Matt Crooks equalised for the visitors.

After 120 minutes of play, the match went into penalty shootout.

Middlesbrough were perfect with eight of their kicks.

But substitute Anthony Elanga failed to put United in the game, as he hoicked a dreadful effort over the bar.

Manchester United were out!

Middlesbrough became the first team into the bag for the fifth-round draw!

What a shattering day for United and a bad day for Ronaldo as he marks his 37th birthday on Saturday.

For Elanda, who replaced Marcus Rashford in the 82nd minute, it was a sad night.

He broke down in tears and was consoled by team mates, including Ronaldo.

Chris Wilder and his players meanwhile raced up the other end of the stadium and cavorted in front of the 9,000 travelling fans.