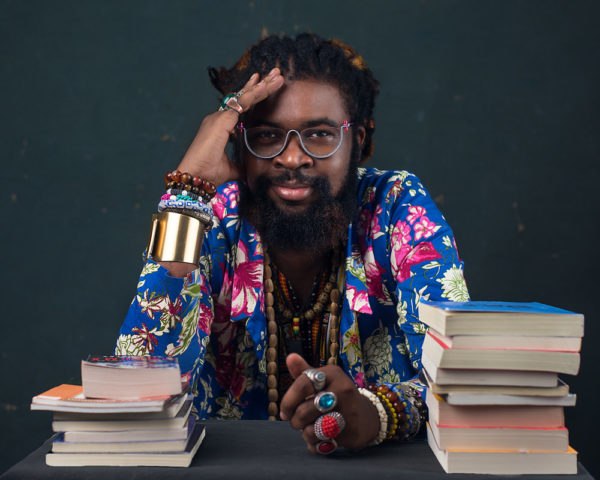 Award-winning Nigerian writer Onyeka Nwelue is a study in unwavering commitment and tenacity of purpose. At 16 he took a night bus to Lagos from the South-East to attend a literary event so he could meet Nobel Laureate Wole Soyinka. At 21, after receiving 45 rejection slips he published his debut novel, Abyssinian Boy to critical acclaim. Nwelue, currently a Visiting Fellow at the University of Oxford, is not just a widely-traveled novelist and poet, he is also a script writer, film maker and music producer. In this interview with NEHRU ODEH, he speaks about his writing career, his relationship with Soyinka, his current literary project with  Mr James Currey, the Grandfather of African literature,  after whom he named The James Currey Society and how he instituted the annual James Currey Prize for the best-unpublished work of fiction written in English by any writer.

Your commitment to literature is legendary. At 16 you embarked on a trip to Lagos (taking a night bus) from the South-East to attend a literary event being organized for Nobel Laureate Professor Wole Soyinka. Why did you decide to be a writer at such a young age and when did you start writing?

Thank you very much for speaking with me. I read quite a lot as a teen. My mother bought a lot of books. My uncle, Nze Christopher Nnadum, had bookshelves. A lot of it. I spent my formative years in his house. Reading. He would tell me stories of the heroic intellectualism of my ancestor, Nze Ukwu Nwelue Nnadum. My great-great-grandfather, Nze Ukwu Nwelue Nnadum, was a great scholar, who harnessed the Igbo language and formulated treaties for many clans in the Igbo kingdoms.

On my maternal side, my ancestor, Obua Ajukwu was a war minister in Oguta. I come from a lineage of writers and intellectuals, from both families. My mother is cousin to Flora Nwapa, who was the first woman to be published by Heinemann Publishing in London. My uncle, Sir Bright Nwelue has been Chief Press Secretary to Imo State Government from 1998 till today, he serves in Douglas House in the role that makes him use creativity. With all these, I would say writing chose me. And I wouldn’t be anything else, apart from a writer.

How did you get to know about the event?

I had read in newspapers about it and thought I must be there, if I wanted to meet the Nobel Laureate.

Could you briefly speak about your experiences on that journey? What was going on in your mind throughout the journey?

If I ever want something, I go out and get it. No matter what it is. I knew it was important to be there. That is usually when anyone would take you seriously. I got a night bus and landed in Lagos, then, headed to National Theatre in Iganmu, where I met Professor Femi Osofisan, who directed me to Mr. Jahman Anikulapo, who made everything possible.

How did you feel when you met Prof. Wole Soyinka for the first time, how did he receive you and what were your experiences like?

I froze when I saw him. In his glory. He held me by the shoulder and the rest, is history.

How has your relationship with Wole Soyinka been? And how has he influenced your writing career?

I always tell people that Wole Soyinka is the God I worship. And please, leave it as capital G. I think he is the most prolific writer in Nigeria. That energy has infested me.

Your critically acclaimed debut novel, Abyssinian Boy was published at 21. What inspired that novel and why did you decide to write it at that young age?

I went to live in India, while my age mates were struggling to get into universities. Living in India, inspired the narrative.

Of course, I felt bad. I still receive rejections today. It was Ayodele Arigbabu of DADA Books, that was courageous enough to take it and publish it.

Don’t you think the writing life is difficult? What keeps you going as a writer?

Nothing in life is easy. Even to have sex is difficult. So, what do you do? You keep going. It is only when we die that we can be free from difficult times.

You are currently an Academic Visitor (Visiting Fellow) at Oxford. How have your experiences been there?

The most beautiful experience I have had in my life.

Could you speak on the African writing project you are collaborating on with James Currey, publisher and renowned editor of Heinemman’s African Writer Series?

As an Academic Visitor at the University of Oxford, I am doing research on the works by James Currey.

Half a century ago in 1962, as more African countries were becoming independent, a distinguished British citizen by the name of James Currey journeyed to Africa as a young and passionate enthusiast of African Literature and culture. His farsighted decision to embrace a publishing series known as the African Writers Series five years later, alongside one of Africa’s most celebrated writers, Chinua Achebe, launched African writers into the consciousness of Africans and the rest of the world in an unprecedented manner. At the time, this was no ordinary endeavour to undertake, and it was particularly daunting for Mr Currey, for conventional publishing practices did not lean favourably towards Africa and African writers.

But through sheer doggedness and compelling acuity, Mr Currey inflamed an extensive continental and global interest in the reading of African writers and literature across the length and breadth of the African topography, among the British people, and among other varied readers across the world.

The success of this honourable human endeavour was so huge that more than three hundred remarkable books authored by African writers, were published within the first twenty-five years of its existence. This feat was made possible by the unusual grit of Mr Currey, whose intervention as a British publisher helped to overturn the dearth of African literature in the African and global literary landscape, particularly in African educational institutions, from primary education to the university. His auspicious intervention propelled African writers and African literature to global acclaim and helped to reintroduce African stories, philosophy, culture, and experiences—from which the world benefits immensely today—to Africans and the whole world.

One important thing that Mr Currey did, was to publish these books in the English Language, if they were originally written in English, or translate them to the English Language where they had been written in any of the African languages like Zulu, Swahili, Luganda, and so on, thereby ensuring their circulation to a very large audience of English speakers and readership across the world. In parts of Africa where French and Portuguese were the predominant languages, Mr Currey initiated partnerships that ensured that the books written in the English Language were translated into the official languages of those countries and subsequently made the books available for a general readership. By sustaining his commitment to promoting books by Africans, Mr Currey gave to African writers a trustworthy medium of expression and to young Africans, a collection of African literature that influenced the thinking of many celebrated Africans today and revamped the meaning of Africa in the minds of countless international audiences.

You would pardon me to emphasize, that it was through the extraordinary dedication of Mr Currey to promoting African literature, that young Africans like me grew up to read the works of African writers like Chinua Achebe’s Things Fall Apart, A Man of the People, Arrow of God and others; Flora Nwapa’s Efuru; Olaudah Equiano’s Autobiography, Kenneth D. Kaunda’s Autobiography, Ngũgĩ wa Thiong’o’s Weep Not, Child and The River Between; Ayi Kwei Armah’s The Beautyful Ones Are Not Yet Born, Cyprian Ekwensi’s Lockdown and Other Stories, and Burning Grass; Wole Soyinka, Ama Ata Aidoo, Buchi Emecheta, Nadine Gordimer, Nelson Mandela, Mariama Bâ, Elechi Amadi, Christopher Okigbo, Ulli Beier, and so many others whose names remain glued to the tongues of different generations of Africans indifferent parts of the continent, and indeed, the entire world.

Mr Currey would later donate his African Writers Series collection—many hundreds of African books by Africans promoting African culture, politics and history—to the Terrence Ranger Reading Room at the African Studies Centre at the University of Oxford. Also, all the books published by the James Currey Publishers which was founded in 1984, are now to be found at the library at St Cross College in Oxford, England. These books by African authors—to which Mr Currey has dedicated his publishing career—are now a treasure trove of knowledge from which scholars from Africa, the United Kingdom and the entire world continue to benefit immeasurably.

To partly celebrate his monumental contributions in promoting African literature, Mr Currey was declared The Godfather of African Literature at a Zimbabwean Book Fair in 1982, attended by many of Africa’s distinguished writers. Mr Currey has ever since enjoyed that honorific. I should add, Your Majesty, that Mr Currey would further prove his extraordinary mettle towards African Publishing when, in 1986, British historian Michael Crowder lamented that there was an African Book Famine—a reality which was partly due to the sudden closure of the Nigerian Foreign Exchanges in April 1982, leaving Mr Currey’s then publishing firm, Heinemann, with a mountainous amount of unpublished books.

Undaunted, however, Mr Currey would ingeniously devise new means to distribute the works of African writers within and beyond the continent, and for this reason, younger generations of Africans like mine would grow up to benefit from the ingenuity of this single extraordinary British citizen. And more, Your Majesty, Mr Currey’s zeal for promoting unheard African voices in Africa and other parts of the world has been sustained across generations of African writers and scholars, so much so that despite his dotage, he is still very enthusiastic about mentoring, publishing and promoting contemporary African writers and scholars.

May I also add, that Mr Currey would further extend his genuine passion for promoting unheard voices, by dedicating a huge amount of time to ensuring that the Caribbean writers are also published and read across the world. This is one of the reasons I founded The James Currey Society and instituted the annual James Currey Prize for the best-unpublished work of fiction written in English by any writer.

Mr. Currey has handed the African Writers’ Series to me and we invite people every other month to Oxford, to participate in workshops following his legacy.

How has working with James Currey been?

Been a fun ride. And Mr. Currey has been attending the workshop himself.

What do you hope to achieve with that project?

A lot. I have said them before: legacy building.

What other projects are you involved in at Oxford?

I am doing a lot. Will talk about them at the appropriate time.

Why do you write?

I write because there is nothing else I can do.

You have always spoken about how your parents influenced your writing career. Could you speak on that?

My father saw me off at the airport to India to write and he reads my manuscripts. My mother taught me and bought the books I read earlier. They are supportive.

You’ve had some unsavoury experiences with security agents and the Rwanda government. Could you speak about those experiences?

The experience in Rwanda is traumatizing. Whenever I see a Rwandan, I feel traumatized.

On 1 February 2018, a day after your 30th birthday you were involved in an accident in Abuja. Could you speak about that experience?

Some things are better left unspoken, but the memories are buried in me.

How has your writing career been so far?

I love how it looks now.

What advice do you have for Nigerian youths?

For them to leave Nigeria. If things are not working out the way they want.