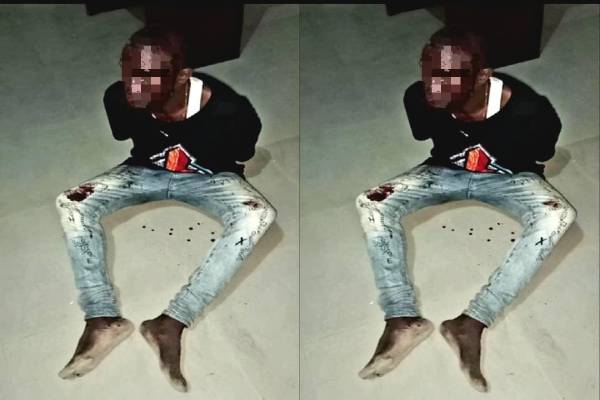 Deberechi Chukwu said to be one of the suspected killers of a retired Chief Superintendent of Police (CSP), Christian Kpatuma at Agwa community, in Oguta Local Government Area of the state.

Imo Police Command has arrested one Deberechi Chukwu said to be one of the suspected killer of a retired Chief Superintendent of Police (CSP), Christian Kpatuma at Agwa community, in Oguta Local Government Area of the state.

The News Agency of Nigeria (NAN) reports that Kpatuma was abducted at his residence on Wednesday, by a group of young men suspected to be cultists.

They took him to a nearby bush where they allegedly killed him, brought his body back and dumped it in front of his compound.

The command’s spokesman, Mike Abattam (CSP), said in a statement that the suspects, Deberechi Chukwu, the leader of the cult group, was arrested after discreet investigation.

Abattam said the suspect was arrested at a border, while trying to escape to a neighbouring State.

The statement said, “following a report of a case of murder received by the Agwa Divisional Police Headquarters that Kpatuma was abducted by a group of young men suspected to be cultist in his house.

“On receipt of information that Kpatuma was taken to a nearby bush where he was killed and later the corpse was brought back and dumped in front of his compound, the Commissioner of Police, CP Rabiu Hussaini, immediately dispatched the command’s tactical teams to the Agwa community with a mandate to fish out the perpetrators of the dastardly act.

“On arrival, the team commenced discreet investigation and after diligent gathering of both forensic and technical intelligence, one of the suspects, Deberechi Chukwu, was arrested while escaping to a another state.

The PPRO said in the course of investigation, it was revealed that the suspect is a notorious kidnapper and an escapee from the Imo Correctional Center, Owerri.

According to him, the suspect, after escaping from the prison, recruited young men into his cult group and were terrorising the Agwa community.

“It is also on record that he was involved in the killing of a lot of security personnel in the state.

“However, he has made useful statement and have volunteered assisting the police in the arrest of other members of his gang currently on the run,” he said.