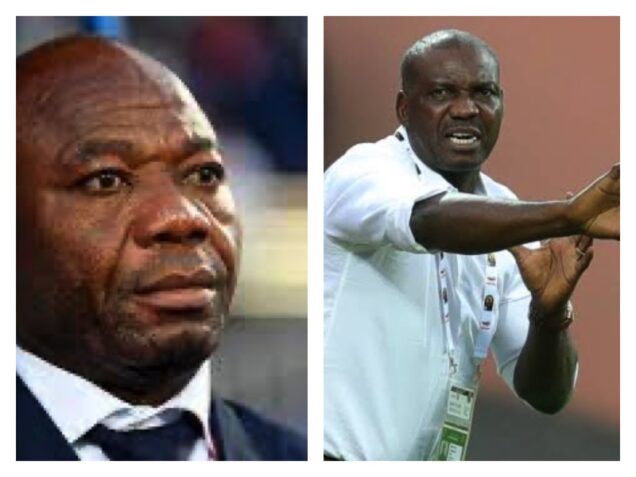 Former coach of Tanzania, Emmanuel Amuneke has been appointed the chief coach of the Super Eagles, the Nigeria Football Federation (NFF) announced on Monday.

Austine Eguavoen, who led the team to the African Nations Cup in Cameroon will continue as the Technical Director/Technical Adviser (interim).

“The NFF Board has approved a recommendation of the Technical and Development Committee retaining Augustine Eguavoen as Technical Director/Technical Adviser (interim) while Emmanuel Amuneke becomes the Chief Coach of the Super Eagles.

Nigeria’s next assignment is the 2022 FIFA World Cup playoff against Ghana billed for March.

It later clarified it has not signed any agreement with Peseiro.

However, the football body is not ruling out the possibility of Peseiro coaching Nigeria in the future.

“We acknowledge and appreciate the interest that Mr Jose Peseiro has shown in Nigeria Football during our very cordial discussions and have absolutely no doubt about his capacity.

“We believe that perhaps in the future, there could be an opportunity to work with him,” the NFF statement explained.

“However, in view of the positive performance of the Super Eagles at the just-concluded Africa Cup of Nations which has given hope to Nigerians and boosted our confidence in the present coaching crew to qualify us for the World Cup in Qatar, we have decided to accept the recommendation of the Technical and Development Committee to retain the Eguavoen-led coaching crew and strengthen it with the addition of Emmanuel Amuneke.”

Amuneke like Eguavoen was a former winger for the Super Eagles. He played 27 times for Nigeria, scoring nine goals.

But his career was marred by a knee injury.

He was part of the team that participated at the 1994 FIFA World Cup in the United States, scoring against Bulgaria and Italy.

Also in that year, he helped the Super Eagles win the 1994 Africa Cup of Nations in Tunisia, eventually being voted African Footballer of the Year.

Additionally, Amunike played all the games at the 1996 Summer Olympics in Atlanta, scoring the winning goal in the final as the national team won the gold medal.Knee problems kept him out of the 1998 FIFA World Cup.

At the club level, Amuneke played for Zamalek, Sporting CP, Barcelona, and Albacete.

He began his coaching career in 2008 with Julius Berger in Lagos. In November 2009, he took charge of Ocean Boys.

Amunike coached the Nigeria national U17 football team to win the World Cup in 2015.

The apogee of his career was his appointment on 6 August 2018 as coach of the Tanzania national football team.

He managed to qualify for the 2019 Africa Cup of Nations, but he resigned from training the team after losing all three games.

He was appointed the manager of Egyptian Premiere League club, Misr Lel Makkasa SC in February 2021.

In March 2021, his role was changed to director of academies.