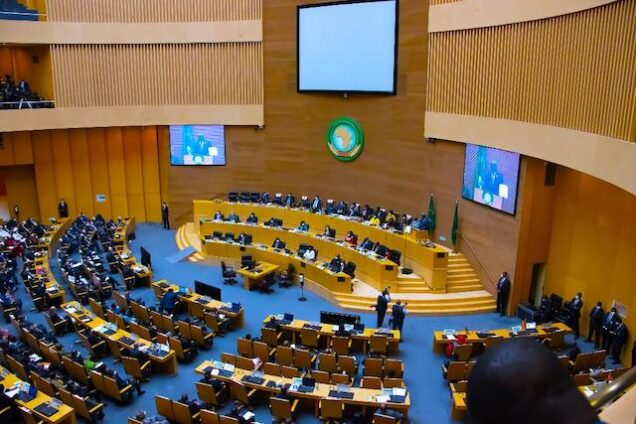 African Union leaders at a session

The African Union Heads of State Summit, in a closed meeting Sunday decided to set up a committee to deliberate on the question of Israel’s accreditation to the AU, granted by the AU Commission Chair, Moussa Faki Mahamet.

The committee will consist of the heads of state of South Africa, Algeria, Nigeria, DRC, Rwanda, Cameroon and Senegal as the AU chair,

In the meanwhile, while the committee does its work, Faki’s July 2021 decision to grant accreditation to Israel will be suspended.

Before the decision could be properly drafted and a resolution presented, Israel began lobbying individual member states, and putting pressure on many diplomats.

As a result, on Sunday afternoon, in the last session, the matter was tabled for debate.

From the beginning, the debate, chaired by Senegal’s President Mackey Sall, was not smooth-sailing .

Sall called, more than once, for the debate to end quickly because he wanted to watch football! His country’s Teranga Lions were playing in the AFCON final against Egypt in Cameroon.

Another country’s deputy-president made a similar appeal.

South Africa began the debate by calling for a suspension of the decision of the chair in granting accreditation to Israel.

Macky Sall of Senegal, chairing, without listening fully, insisted that the decision must be reviewed by the committee.

Namibia supported South Africa. It called for a suspension of the decision.

Namibia reminded the meeting that suspension was part of the initial agreement made this morning.

Ivory Coast supported Sall that the issue be examined by the committee.

Algeria supported South Africa and reminded the Chair that suspension was the original part of the decision from this morning.

DRC supported the Chair and challenged the suspension.

The DRC wanted Israel’s accreditation to stand. The leader also implied he wanted to go and watch football.

Tunisia supported the South African position, calling for suspension of the July 2021 decision

The chair tried to stifle Tunisia. He reminded the meeting that they need to watch football.

Uganda opposed the decision to suspend the July 2021 accreditation

Gambia: “ We should not spend so much time on outside issues.” Supported the Chair.

Added: “We must go and look at the football.”

South Africa spoke again, insisted that the suspension of the July 2021 decision must prevail.

“Its logical… This is like an appeal and based on an appeal the decisions implementation are stopped.” South Africa asked the Chair to be “logical and rational”.

Algeria spoke again, reminding the body that 24 countries had objected to the decision to accredit Israel.

Senegal, chairing, declared that the committee must meet and discuss the issue of suspension.

Senegal declared that Israel will remain an observer until the committee decides otherwise.