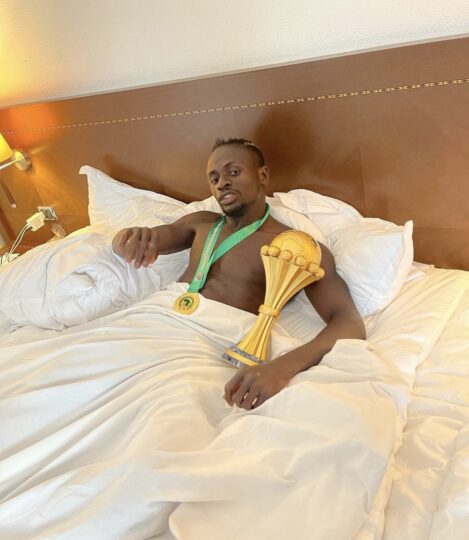 It’s surely a dream come true as Sadio Mane, Senegal’s striker took the excitement of the AFCON triumph to his hotel bed.

He shared on Instagram on Monday morning from Yaounde a couple of photos taken on his bed hugging the trophy and proudly wearing his gold medal.

He captioned the post “Alhamdoulilah!”, which means Allah be praised.

Mane would have been a villain if his country had missed winning the continental championship on its third final.

The Liverpool dangerman had squandered a 7th minute penalty that would have been decisive in the tight game that stretched to 120 minutes and tie-breaker penalty shootout.

But he turned the hero after he scored the fifth penalty to give his country a 4-2 victory over the Pharaohs of Egypt.

Undoubtedly Mane and the team of Teranga Lions deserved to celebrate.

For all his efforts in the tournament, Mane was crowned TotalEnergies Man of the Competition on Sunday.