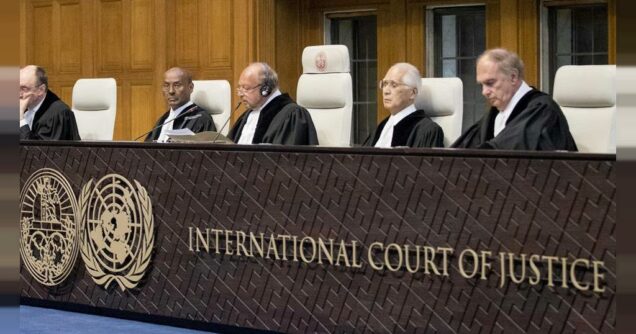 Judges at International Court of Justice

Judges at the International Court of Justice have asked Uganda to pay $325 million in reparations to the Democratic Republic of Congo for its role in conflicts in Congo’s resource-rich Ituri province.

Uganda must pay the sum in five yearly instalments of $65 million to start in September of this year, presiding judge Joan Donoghue said on Wednesday.

The total award is far short of the over $11 billion Congo had asked for.

The court dismissed several claims including broad compensation for macroeconomic damage, saying a clear link between Uganda’s actions and alleged economic damage was not shown.

Representatives for Uganda at the court did not respond publicly to the ruling.

In hearings in April, Uganda said its economy would be ruined by the billions of dollars Congo sought in reparations.

On Wednesday, the judges said they were satisfied the reparations awarded and the terms of payment were “within the capacity of Uganda to pay”.

The long-running dispute was first brought before the United Nations’ highest court in 1999.

After lengthy proceedings, the court ruled in 2005 that Uganda had violated international law by occupying parts of the eastern Congolese province with its own troops and supporting other armed groups during a war that raged from 1998 to 2003.

Uganda had argued that its troops went into Ituri at Congo’s invitation.

The court dismissed that argument in 2005 and ruled Uganda was an occupying power in the province.

The court ordered the African neighbours to negotiate reparations, but in 2015 Congo returned to the tribunal, saying the talks had stalled.

On Wednesday the court ruled on the final compensation amount.

The amount breaks down into $225 million for damages to persons including the estimated 10,000 to 15,000 deaths attributed to Uganda during the conflict but also for victims of rape or child soldiers.

For property damage the court awarded $40 million and another $60 million was given to compensate for the loss of natural resources like diamonds and coltan mined in Ituri.

In earlier hearings, representatives for Congo said any reparations awarded would be put into a fund and distributed fairly to the people that suffered directly from Uganda’s actions.

Rulings by the ICJ, which deals with disputes between states, are final and without appeal.