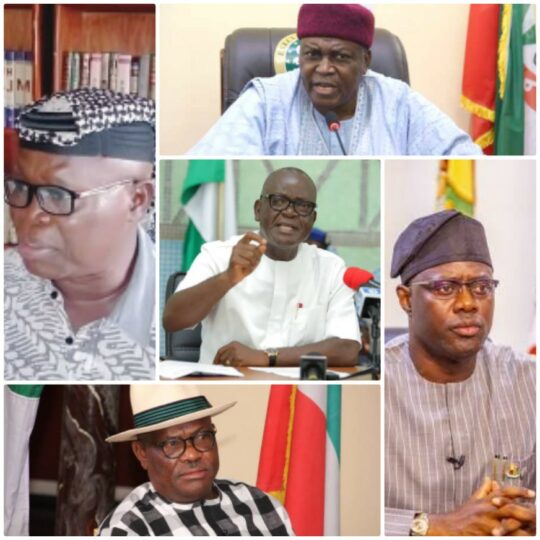 The Islamic human rights organization in a statement released on Wednesday said the governors should not attempt to contest for any federal position because they have been blacklisted by Muslims.

The group claimed it has evidence that Governor Ishaku has been sacking Muslim workers without following due process and replacing them with his Christian brethren.

“Contrary to the false public image of a Christian state governor who promotes peaceful and harmonious coexistence between Christians and Muslims under him, we have incontrovertible evidence that Governor Darius Ishaku has been using his office to put Muslims at a disadvantage through several administrative maneuvers and misadventures.

“The governor recently claimed that the Taraba Muslim Council which accused him of marginalizing Muslims in the state was inciting religious tension but that is far from the truth. The governor is simply trying to cover his tracks. But the wind has blown and we have seen the ruff of the hen.

“The truth is that Ishaku’s reckless violation of Allah-given fundamental rights of Muslims in his state is legend. Although our office has been inundated with complaints of discrimination against Muslims, we will cite just one example today for the economy of space.

“The case of Mallam Nasiru Audu Baba is most striking. He was unceremoniously and illegally removed as the Managing Director and Chief Executive Officer of Taraba Microfinance Bank Limited in 2012. But the governor suspended him from office in 2016 without any reason and without a board resolution. The Central Bank rejected the suspension on grounds of lack of due process.

“But Governor Ishaku ignored the Central Bank’s advice and went ahead to set up a kangaroo committee which, however, neither indicted Mallam Nasiru nor the board of the bank. Nevertheless, the governor illegally terminated Mallam Nasiru’s appointment. The termination of his appointment was retroactive as it was issued on 13th February 2018 but with effect from 30th September 2016. Expectedly, a Christian woman was appointed in his place.

“Though a federal high court gave judgment in favor of Mallam Nasiru and the board of the bank. Instead of obeying the court order, Taraba State Government went to the appellate court which ruled that the matter should be taken to the industrial court.

“Mallam Nasiru and the board headed to the Supreme Court which is yet to determine the case. This and many other atrocities were committed against Taraba Muslims by Governor Ishaku. Although the board of the MicroFinance Bank renewed his appointment for another five years, his suspension and subsequent backdated dismissal was a manifestation of tyranny while the appointment of a Christian in his place exposed the governor’s tortuous policy of religious discrimination and favoritism.

“Governor Ishaku thinks nothing can be done to him by the Muslims since he is rounding up his second term but he has miscalculated. Many past governors are in the senate today because of their good performance while in office. Some of them are also aspiring to become ministers or the president of Nigeria.

“MURIC’s advice to governors who are Muslim-haters like Ishaku, Ortom, Wike, and Seyi Makinde is that they should not attempt to occupy any federal office. We have blacklisted Muslim-haters and Nigerian Muslims will ensure that they never get there.”