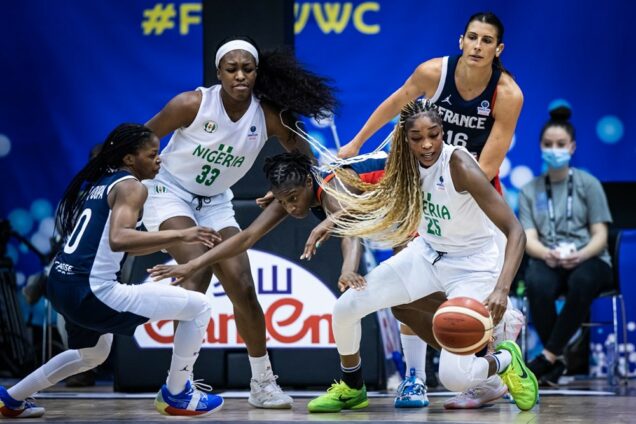 D'Tigress in the match against France

The News Agency of Nigeria (NAN) reports that D’Tigress on Friday qualified for the 2022 FIBA Women World Cup to be hosted in Australia later in the year after a 67-65 win against world number five-ranked team, France.

The reigning African Champions had put up a strong resistance but bowed to the superior power of China in their opening game, losing 76-90 to the seventh ranked team in the world on Thursday.

However, the team led by Coach Otis Hughley did just enough in their second game against France as the D’Tigress rallied back from a 17-point deficit in the first quarter to snatch a win and book their second consecutive world cup outing with a game to spare.

Second quarter saw a more purposeful and dominant D’Tigress crawl their way back into the game with a 16-10 points win to close the first half 27-38.

Not comfortable with the scores, the team applied more pressure to win the third quarter 21-14 before another impressive 19-13 points finish in the fourth quarter to seal the win.

Congratulating the ladies, Mark said that the team showed the true Nigerian spirit by defying the odds to beat the fifth best Women’s Basketball team in the FIBA rankings.

“Thank you for putting up a good fight. You have made the federation proud, the country is proud by your performance.

“You defied every odd to beat one of the best basketball team in the world, that’s the Nigerian spirit.

“You have conquered one of the best in the world and it is now time to step it up a notch as we stand solidly behind you in your next game against Mali. Keep soaring higher,” he said.

The NBBF boss also appreciated President Muhammadu Buhari as well as the Minister of Youth and Sports Development, Sunday Dare, adding that the team’s victory couldn’t have been possible without their continuous and relentless support for the NBBF.

NAN also reports that second placed Nigeria will face Mali later on Saturday (today), while France will hope to bounce back when they meet China. (NAN)