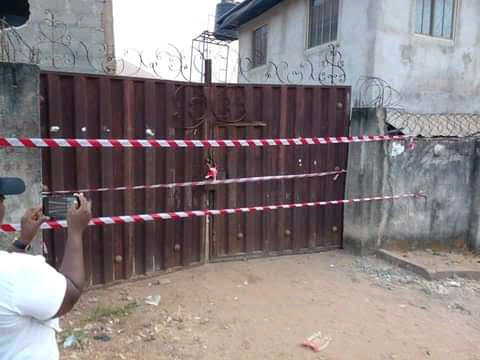 The police in Delta have arrested the Proprietress of Arise and Shine Nursery and Primary School, Asaba and her son for allegedly flogging a 19-month-old toddler to death for playing with water and wetting his school uniform.

Commissioner for Primary Education, Chika Ossai, while sealing off Arise and Shine Nursery and Primary School located at camp 74, off Amaechi Nwora lane, in Asaba, Oshimili South local government Area of Delta State, said the private school was existing illegally and not recognized by the State where the late toddler was flogged 31 strokes of cane and later died after many hours of battling for life.

Ossai stated that the Delta State Government would not relent in its efforts at ensuring that all illegal schools across the state were closed.

The commissioner, who spoke through the Permanent Secretary, Basic and Secondary Education, Mr Austin Oghoro, pointed out that Arise and Shine Nursery and Primary school, from records of the state government was neither registered nor recognised by government.

While sympathizing with the family of the deceased, the Commissioner said the state government would leave nothing to chance in investigating the circumstances surrounding the ugly act.

He confirmed that the police had arrested the proprietress of the school and her son who were involved in the alleged crime and that investigation was ongoing.

It would be recalled that a 19-month-old baby simply identified as Obinna died after falling into coma resulting from 31 strokes of cane he allegedly received from the school’s owner, Mrs Ogbo, and her son.

The lid of the sad incident was blown open by Ebenezer Omejalile, Chief Operating Officer of Advocates for Children and Vulnerable People’s Network, a human rights group based in Asaba.

Meanwhile, the mother of the victim had alleged that her son died after inhuman act was perpetrated by the school owner and her son, who tied the hands and legs of the baby before flogging him into coma for wetting his body.

The woman and her son, who were initially in Police custody, but released due to agreement with the victim’s family, were rearrested on Saturday after the baby died.