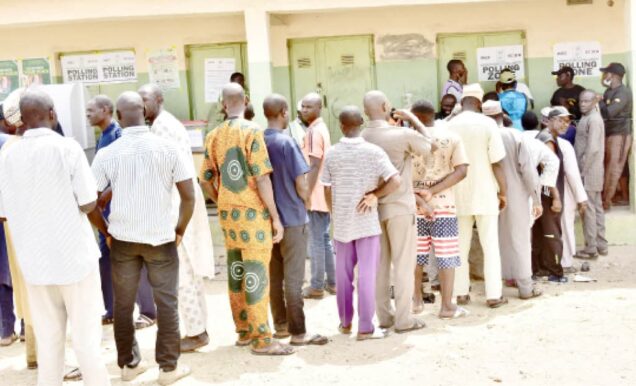 The Centre for Democracy and Development (CDD) said the elections conducted in Federal Capital Territory (FCT) Area Councils on Saturday were marred by massive vote-buying by politicians who were desperate to win.

Aigbe said that the center observed Saturday’s election and made some observations.

He said that voters across the six Area Councils and the 62 political wards in the FCT headed for the poll to elect Chairmen and Councilors who would represent them for the next four years.

He added that the FCT Area Council Election was the only local councils’ election handled by the Independent National Electoral Commission (INEC).

“As such, CDD alongside other key stakeholders in the electoral process kept a close watch on the process, while educating and mobilizing the electorate to participate massively in the process.

“Observers reported cases of vote-buying in Gwagwalada, where votes were bought with money.

” Another case of vote-buying was reported in 03 P.U 003 where a voter was asked to quickly vote so he can be handed his money.

“At Abaji Southeast Ward Code 03 PU 003 there were reports of serious vote-buying, also at Abaji/ward 001 PU 003 party agents were seen doling out money to voters who only display their ballot papers indicating their party was voted for.

” In PU 003 Abaji Southeast Ward, the vote-buying strategy involved party agents asking voters who had been induced to converge in a particular location away from the polling unit to sell their vote. Money exchanged hands ranging from N1,500 to N2,500.

“Voters were thereafter asked to meet a particular person for submission of their PVCs,” he said.

Aigbe however urged Nigerians to desist from vote-selling as it was capable of comprising the electoral process.

He said that resisting vote-selling would make politicians know that they could no longer buy votes, so they would have to perform.

Aigbe said that the functionality of the INEC Bimodal Voter Accreditation System (BVAS) for voters during the election was also questionable.

“In terms of the number of minutes spent on accreditation for areas where the BVAS worked, CDD EAC observers reported that voters spent an average of 8-10 minutes on the accreditation process.

“This translates roughly to eight voters being accredited in one full hour.

“CDD observers also reported that across all the Area Councils, AMAC recorded the greatest number of functional BVAS.

” The Area Councils where observers reported non-functional BVAS were Kuje and Abaji,” he said.

Aigbe said that data from CDD field observers indicated that the functionality of BVAS continued to be a major source of hitches and delays in the electoral process.

“The poll officials who arrived after 8:30a.m. stood at 26.8 percent across polling units observed by CDD EAC observers,” he said.

Ajanaku said that in ward five in Abuja Municipal Council (AMAC) a polling station with four polling units did not record a single voter turning out to cast his vote during the poll.

He said that the center also witnessed poor crowd management, which led to INEC officials being overcrowded by voters, thereby disrupting the general electoral processes.

He added that a serious fight ensued between voters and the queue was dissolved. thereafter, a group of thugs invaded Ward 06 PU 003 and carted away the ballot box and other electoral materials.

He said that in terms of gender participation in the election, CDD observers’ data showed that 33.2 percent of INEC officials were women, while 66.8 percent were men across the observed areas.