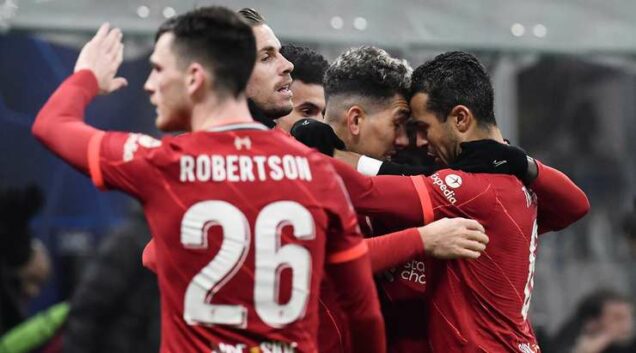 Liverpool defeated Inter Milan 2-0 in Italy on Wednesday in the round of 16 to brighten their chance of qualifying for the Champions League quarter-finals.

After a goalless first half, the visitors opened scoring on 75 minutes through Roberto Firmimo.

A corner was whipped in and Firmino was in the right place at the right time, planting his header straight into the bottom left corner.

Salah was in the right place at the right time to get to the rebound inside the box and gleefully rifled the ball low into the middle of the net.

Earlier on 23 minutes, Sadio Mane latched onto a rebound in the box and fired a shot a whisker wide of the right post.
Liverpool dominated possession and had 12 goal attempts and two shots on goal which they scored, while Inter Milan could only garner nine goal attempts and no shot on goal.
The second leg comes up at Anfield, England two weeks time.
Tags:   Inter Milan   Liverpool