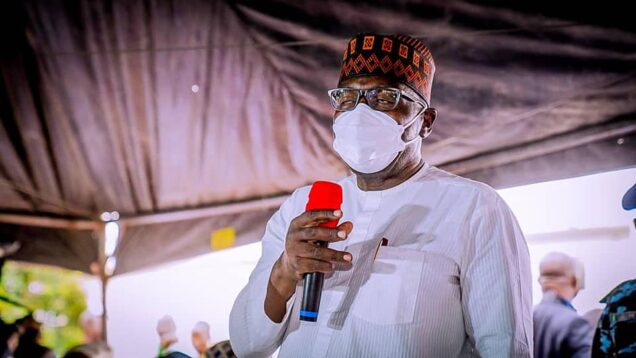 Gov. Abdulrazaq in Osogbo for Osun APC primary on Friday

AbdulRazaq gave the assurance at a stakeholders’ meeting on Friday in Osogbo.

The three aspirants for the primary, Gov. Gboyega Oyetola, former Secretary to the State Government, Alhaji Moshood Adeoti, and Mr Lasun Yusuf, former Deputy Speaker of the House of Representatives attended the meeting.

AbdulRazaq said the committee will be fair to all aspirants and also ensure a peaceful exercise.

“We don’t want violence in Osun State. Let’s have a peaceful exercise on Saturday and continue the progress we have made,’’ he said.

Secretary of the Committee, Sen. Julius Ucha, urged the aspirants as well as their supporters to ensure peace, love and unity during the exercise.

While reading the primary election guidelines to the aspirants, Ucha said open secret ballot system would be used for the primary.

He said delegates would use the party’s registration slips to cast their votes.

Ucha said the committee would conduct accreditation and voting at recognised wards, adding that accreditation would hold between 8 a.m. and noon, while voting would end by 2 p.m.

In his submission, APC Chairman in the state, Mr Gboyega Famodun, said the primary would take place in the 332 wards in all the 30 Local Government Areas in the state.

Famodun said everything needed to make the exercise hitch-free had been provided.

Also, Gov. Oyetola, who described the primary as a family affair, urged other aspirants not to regard the exercise as a do-or-die affair.

He said with calibre of the committee members, the exercise would be free, fair and credible.

Another aspirant, Adeoti, appealed to the committee to provide the contestants the primary election guideline and the party’s register.