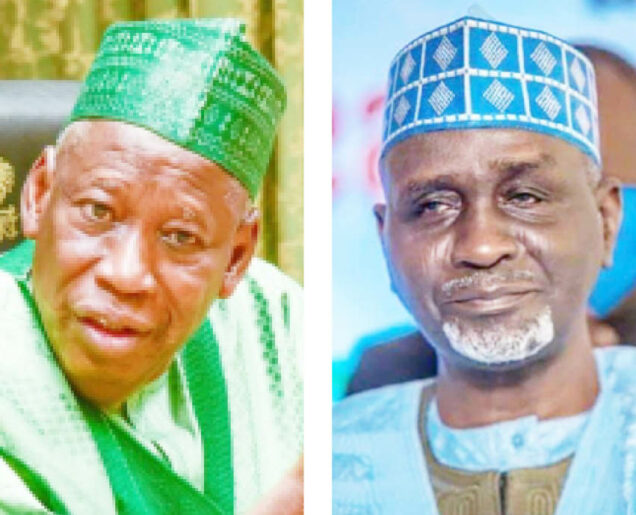 Abdullahi Ganduje of Kano State on Thursday extended an olive branch to the Sen. Ibrahim Shekarau-led faction of the All Progressives Congress (APC).

He made the gesture after the Court of Appeal in Abuja dismissed the judgment of a lower court which upheld the parallel congresses of APC conducted by the ‘G-7’ faction of the party led by Shekarau.

The appellate court insisted that the Federal high court, FCT division lacks the jurisdiction to sit on the APC ward and local government council congresses which recognized Haruna Ahmadu Danzago as party chairman.

The court also held that the case was not a pre-election issue but an internal party tussle; therefore, it should be decided by the party’s Caretaker/Extraordinary Convention Planning Committee.

Responding to the judgment after a thank you visit to the APC national secretariat in Abuja, Ganduje asked the Shekarau-led faction to give peace a chance.

Ganduje appealed to the defeated faction to join hands with him in building the party.

”Kani State is 100 percent APC. I am appealing to Shakarau’s faction because we are members of one family: the APC. We should come together and forge ahead to build the party,” he said.

The governor confirmed that the APC national secretariat had given Abdullahi Abbas a certificate of return as the authentic state chairman.

He expressed gratitude to God for the judicial victory, saying that it confirmed that all the elections conducted in the state, from the Wards to the state level were legally recognized.

“I want to thank the party and the leadership for initiating the peace movement to ensure that our party is united.

“I have to thank the party for that, a judgment has been passed in our favour and APC stakeholders in Kano are here to show our appreciation to the leadership of the party.

“We thank the House leader, Senators, other representatives of the 44 Local Government chairmen, State Assembly members, elected councilors from Kano State and you members of the press for covering all the court proceedings,” he said.

Ganduje was accompanied to the APC national secretariat by Sen. Kabiru Gaya, Majority Leader House of Representatives and Ado Doguwa, among other party chieftains from Kano State.