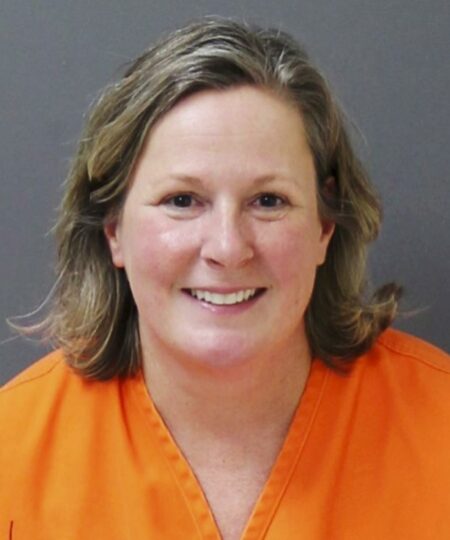 Katie Wright blasted the two-year punishment as too lenient and questioned the sincerity of Potter’s tearful testimony at trial.

“Kim Potter murdered my son, and he died April 11. Today the justice system murdered him all over again,” Wright said outside the courthouse.

Prosecutors had sought a sentence of seven years and two months, in line with state guidelines for first-degree manslaughter.

Under state law, defendants facing multiple charges for the same act are sentenced only for the most serious count.

But Judge Chu appeared to side with the arguments for leniency put forward by Potter’s lawyers, who cited her lack of a prior criminal record and her complaint-free 26 years on the police force.

Potter, 49, who mistook her handgun for her Taser in firing on Wright, 20, as he resisted officers who pulled him over in a Minneapolis suburb last April, was found guilty by a jury in December of first-degree and second-degree manslaughter.

“This is a cop who made a tragic mistake,” said Judge Regina Chu, who became emotional as she handed down the 24-month sentence, two-thirds of which is to be served in prison and the remaining third on supervised release.

Chu said Potter was required to make a split-second decision during a “chaotic and tense” encounter with Wright and that the evidence presented at trial justified the veteran policewoman’s intended use of a Taser to protect another officer at the scene.

But she said a sentence of probation, which Potter’s lawyers had argued for, was not enough to account for the loss of life.

“In this case, a young man was killed because Officer Potter was reckless,” Chu said, calling the case one of the saddest in her career. “Rightfully, there should be some accountability.”

The shooting in Brooklyn Center triggered multiple nights of protests there.

It occurred just a few miles north of where Derek Chauvin, a former Minneapolis police officer, was standing trial for killing George Floyd, a Black man whose 2020 death during an arrest helped set off demonstrations around the nation and the world over racism and killings by police.

In rendering her decision, the judge made a point of distinguishing Potter’s actions from those of Chauvin, who knelt on Floyd’s neck for more than nine minutes and was convicted of murder. Both former officers are white.

One of her attorneys, Paul Engh, said on Friday that Wright had been an “aggressor” in resisting arrest.

Chu also said she believed that Potter, who broke down in giving brief remarks on Friday, had shown deep remorse.

“I am so sorry that I hurt you so badly,” Potter said in court on Friday in comments directed at Wright’s family. “My heart is broken and devastated for all of you.”

Potter has not appealed her conviction and has not indicated she plans to appeal.

Potter and a second officer pulled Wright over because there was an air freshener illegally hanging from his mirror and his vehicle registration tab had expired.

They then learned of a warrant for his arrest on a misdemeanour weapons charge and tried to detain him. Wright resisted, breaking free from the second officer.

Potter then shouted, “Taser, Taser, Taser!” and fired at Wright with her handgun, video from her body-worn camera showed. Potter testified that she feared for the life of a third officer who had entered the car through the passenger side.