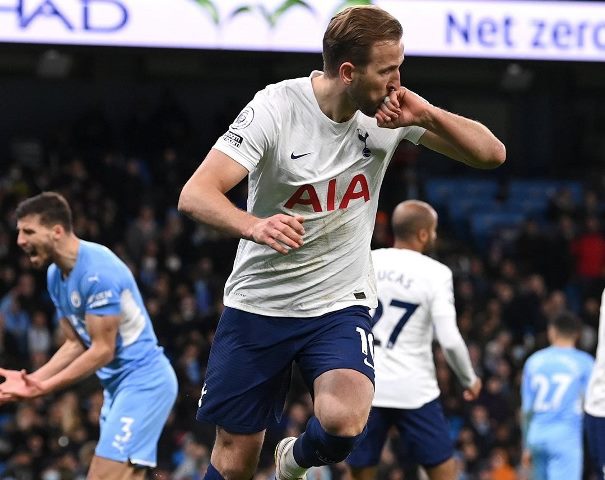 Despite claiming massive ball possession, Tottenham were the more adventurous and dangerous on the counter attack.

The visitors opened scoring on four minutes after a great link up play between Dejan Kulusevski (and Heung-Min Son gave the former a clear sight of goal on the edge of the box. He did not disappoint and beat the keeper low in the middle of the goal.

City equalised on 33 minutes through Ilkay Gundogan. He was in the right place at the right time to get to the rebound inside the box and gleefully rifled the ball low inside the right post.

Harry Kane put Tottenham in the lead again, finding himself some space inside the box to get on the end of a pass from Heung-Min Son, then sent the ball into the top right corner.

Kane thought he had given Tottenham a 3-1 lead on 73 minutes, but the goal was ruled offside by VAR.

City got a lifeline from the penalty spot on added time to make it 2-2. Riyad Mahrez coolly converted the penalty, sending the ball into the top right corner.

Dejan Kulusevski played a neat lofted pass into the box for Kane, who beat the defender in the air and planted a header into the bottom right corner from close range.

With Tottenham’s victory, City’s lead at the top had been cut to six points with second place Liverpool still having a game at hand.

Liverpool will cut City’s lead to three points if they beat struggling Leeds United on Wednesday.