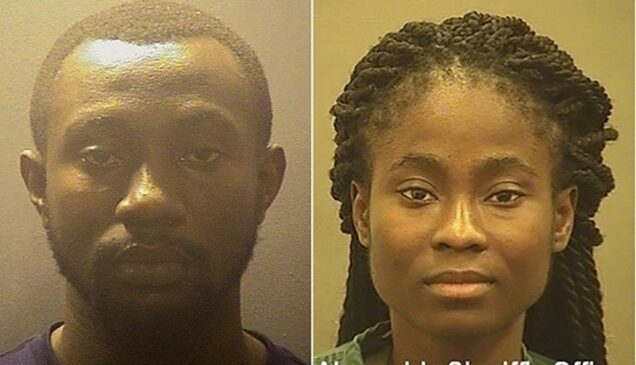 The jail terms were their sanctions for laundering money for romance scammers who targeted a retired former Foreign Service officer for the U.S. Agency for International Development.

The unidentified ex-USAID officer was 77 years when the scammers preyed on him. He is now 79, suffering from dementia.

Another victim was a 68 year-old widow from Chesapeake, who was fleeced of $300,000, as well as items including clothes, a computer and jewellery. When she ran out of cash, she took out a home equity loan.

To fleece the woman, Richard Dorpe, a Ghanaian national, had portrayed himself as a balding 57-year-old white man from Virginia Beach named “Jerry Linus” on the “OurTime” senior dating website.

Dorpe was sentenced to more than three years in prison last year by the federal court in Norfolk.

Linda Mbimadong and Richard Broni’s role was to serve as receivers of the money drained from the USAID retiree and the widow, among many others, in exchange for a cut of the proceeds.

The USAID victim had received awards for identifying waste, fraud and abuse in the government. But he was not a match for the conscienceless scammers.

By 2019, he was living in Annandale, Virginia. He had dreams of moving to a beach where he could spoil his grandchildren.

Then he connected on a dating app with someone he believed was a widow in her 30s. A year later, he had lost over $600,000 to a Ghana-based ring of scammers, his retirement account was drained and he was left “financially decimated,” his son wrote in a court filing.

“It did not matter when [he] revealed that his credit was ruined, that he could not afford to pay for medical insurance, his bills, or even his medications,” the man’s son wrote.

He said the scammers “took advantage of an elderly man with declining physical and mental health, showing no remorse in trying to extract the maximum amount possible for him at every turn.”

“This was really an ageless, classic confidence game that has played out over modern social media,” Assistant U.S. Attorney Russell Carlberg said in court.

Prosecutors said Mbimadong and Broni were small players in a large operation that used a variety of tricks, including promised romances, to prey on vulnerable, older Americans.

The scheme was sophisticated enough that it included fake online biographies for the participants, who posed as lawyers, accountants, diplomats and other successful people who had gotten into sudden financial trouble.

Other scammers would post as lawyers or financial planners to add legitimacy to the requests. They would press victims for personal information and then use those details to exploit them.

Prosecutors have identified two dozen victims of the conspiracy. Nationwide, the Federal Trade Commission says, reports of romance-related scams have been rising exponentially, from $87 million in losses in 2017 to $547 million last year.

What’s “particularly deplorable,” Carlberg said, is that the scammers pressed for “everything these people have,” persuading them to drain retirement accounts and take out loans on their homes and cars.

When they ran out of money, Carlberg said, they sometimes stole the victims’ identities to open new credit card accounts or to create new fake online dating profiles.

While the two defendants were not involved in those deceptions, they accepted some of the profits and provided a conduit to co-conspirators overseas.

The Annandale man told the scammers he was so depressed that he was considering suicide, the son wrote, but they continued to coerce him into sending more money.

Along with over $400,000 in cash, he spent $200,000 on Apple products for the conspirators that prosecutors say were sold in Ghana.

He has since been diagnosed with dementia.

The victim’s children contacted law enforcement in April 2020, starting the investigation that led to the convictions of Broni and Mbimadong.

Judge T.S. Ellis said the sentences would have been much harsher if not for their cooperation in identifying the perpetrators of the scheme, who he expressed hope would be arrested “promptly.”

Broni and Mbimadong took about 10 percent of the proceeds in exchange for moving money and products from the victims to the ringleaders.

“I was surprised at how many [victims] there were,” the Annandale victim, who asked not to be identified by name, said outside federal court in Alexandria on Friday.

Another victim, according to court records, is a professional psychologist.

“I was played as an openhearted idiot, and that’s what I became,” wrote another victim, who lost her retirement savings to a man she thought was a doctor working in Afghanistan. “This has been a terrible way to learn not to trust.”

Through tears, Mbimadong told the judge that while she knew she was involved in fraud, she was unaware the violations were so cruelly intimate.

“I did not know a lot of what was going on,” she said. “I just looked the other way.” She has agreed to pay $1.3 million to the victims.

Broni and Mbimadong live in New York and had been romantically involved.

Neither had any criminal record; Mbimadong has a master’s degree in public health and was pursuing a PhD at Rutgers University.

“She could have pursued a different course in life,” the Annandale victim said, “instead of defrauding people.”

In sentencing memos ahead of Friday’s hearing, Mbimadong and Broni, who were living in New York City at the time of their arrest, apologized for their actions.

“I have to express my ugly truth. I was selfish, ambitious and greedy for success,” Mbimadong wrote.