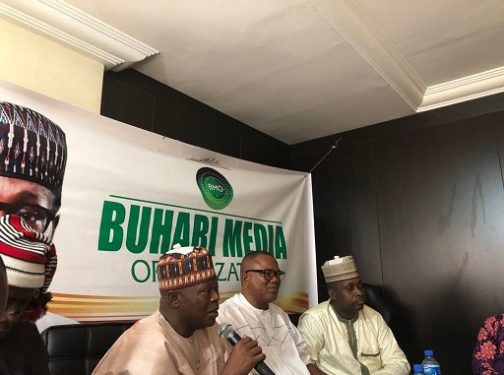 The Buhari Media Organisation (BMO) has said that Nigeria’s latest GDP figures have shown that it was right when it insisted that the country will surpass the World Bank and International Monetary Fund’s (IMF) projections of 2.6% and 2.7% economic growth respectively in 2021.

The group said in a statement signed by its Chairman Niyi Akinsiju and Secretary Cassidy Madueke that it is glaring proof that BMO’s positions on national issues are facts-based.

“We recall that when the World Bank and the IMF projected a 2.6% and 2.7% growth rate for Nigeria in 2021 respectively, we boldly maintained in a widely circulated press statement that the country on the watch of President Muhammadu Buhari would surpass those projections.

“We said in the statement titled ‘NIGERIA WILL AGAIN SURPASS IMF, FG’s GDP GROWTH FORECAST OF 2.6%, 3%-BMO’, and published on October 25 last year, that the current policies of the administration would boost Nigeria’s economic projections beyond what the Global financial bodies predicted at the time.

“Our carefully considered and fact-based position was that ‘based on several positive indicators, the country’s GDP will indeed exceed the IMF projection of 2.6% and the Nigeria government’s 3% at the end of the year 2021.

“We hinged our views on what we described as the various proactive and progressive economic measures put in place by the President Muhammadu Buhari administration and added that it was not the first time that IMF made projections that Nigeria kept disappointing it by recording higher economic growth.

“What happened is that the two bodies (IMF and World Bank) don’t usually follow the trend of what the government is doing, hence their projections turned out wrongly,” the group said.

BMO added that it was able to correctly project a better GDP figure than IMF and World Bank because of proper analysis of the facts at its disposal.

“In 2019, IMF had projected a 2.1 % economic growth for Nigeria, but against its prediction, Nigeria recorded a real growth of 2.27 percent in the Gross Domestic Product (GDP).

“This time the country had a 3.4% growth compared to the 2.6 % projection which has a lot to do with the complete restructuring of the economy by the Buhari administration.

“So, not surprisingly, in a year that the oil sector performed poorly for 12 consecutive months, there has been a progressive growth of the non-oil sector, especially in the Agriculture and the ICT sectors.

“We make bold to say that it is not through sheer luck. It is a result of a deliberate effort by a government, for the first time in Nigeria, to diversify the economy.

“Also, the Central Bank of Nigeria (CBN) has been doing so much in the Buhari years under various interventions including the Anchor Borrowers Programme (ABP) and the Economic Recovery and Growth Programme (ERGP) even before Covid-19 struck.”

BMO assured that President Buhari will not relent in his efforts to make Nigeria better than he met it.