Nigeria's a Banana Republic, but no enough bananas to eat - Niyi Osundare 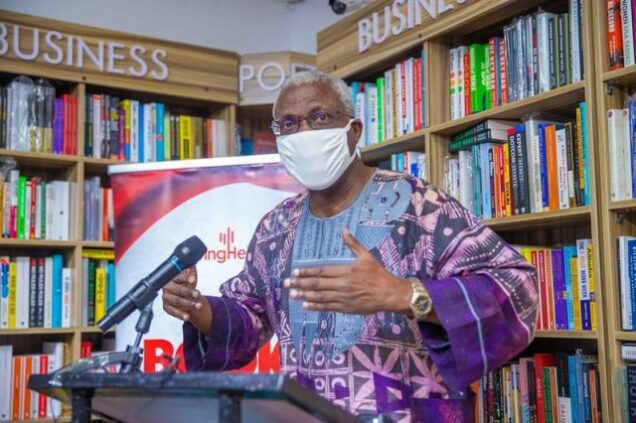 Multiple award-winning poet, scholar, playwright and public intellectual at the University of New Orleans, Niyi Osundare has said there is no government in Nigeria.

The highly accomplished academic stated this at a book reading tagged An Evening with Professor Osundare which held at Roving Heights in Victoria Island, Lagos on Sunday 20 February 2022 against the backdrop of failure of governance and governmental recklessness in Nigeria.

“Where is the government of Nigeria? I don’t have the answer. If any of you know where our government is, please tell me,” he lamented.

Osundare also got the audience roaring with laughter when he said “Nigeria is a banana republic but we don’t even have enough bananas to eat.”

The event, which had a good turn out as the venue was filled to capacity, was organized by Committee for Relevant Art, CORA, in conjunction with Roving Heights to kick-start its Book Trek lined up for the year.

The poet not only read from his latest collections of poems entitled “Green: Sighs of our Ailing Planet and Snapsongs” but also interacted with the audience.

Jahman Anikulapo, journalist and former Editor, The Guardian on Sunday moderated the event.

The author of award-winning poetry collections such as Songs of the Marketplace, Eye of the Earth and Waiting Laughters, who thrilled the audience with his lyrical poetry that made him one of the foremost poets on the African continent also bemoaned the seeming invisibility and absence of governments in Nigeria and Africa in general.

“When you look at what is happening in our country today, clearly four out of every five young men and women I met in this country are trying to find their way out. Everybody is trying to run away. Do I blame them? No. Not at all. It is our rulers who don’t even feel this alarming,” Osundare said, cautioning Nigerians against the craze to relocate abroad. “The streets of America, Britain and France are not filled with gold,” he averred.

“People who rule us don’t care. And I daresay I don’t think we love this country. No. We don’t know where we are bleeding from every speck. And the best are living the country.

“In the past, the slavers came across the Atlantic. That is one truth people don’t like hearing. There wouldn’t have been buyers if there were no sellers. Our betrayal of our brothers and sisters began long time ago, five hundred years ago. We must never forget that because there are concurrent sellers in different forms,” Osundare said, maintaining that Africa is in the third phase of colonialism.

He also drew the audience attention to the connections between literature and history and affirmed why the Nigerian writer must be socially committed and the reason they must not divorce context from text.

“Let’s begin with this whole idea of literature and history. I think people draw lines between them, they create gulfs. What I see are interconnections and bridges. Any writer of consequence has to be a historian of our time. And any historian of consequence has to be a literary artist too. History has told us this Literature is history with vision, visionary history…. We have to make sure that the future does not forget, especially in a country like ours, on a continent like ours.

“The enemies of humankind are people who don’t see connections. If you are not hungry, if you are not afraid of being kidnapped, if your car engine has not knocked, if your neighbour’s generator is nor splitting your ears , how is it possible you suffer all these things and not reflect them in your writing. Our world is a large place. Don’t ever divorce context from text. It’s very important. Art never loses its value.”

When Sam Omatseye, poet, writer, journalist and Chairman, Editorial Board of the Nation Newspaper asked the poet at the Q&A session “how do we distinguish between text and context and how are we sure that there is any such thing as art because anything that is spat out has a context,” Osundare however responded by saying that the relationship between form and context is a symbiotic one.

“In our own generation we started asking: A beer bottle when you put it on the table has form has shape, very beautiful; … But you could trace that to its beauty. But if you want beer something has to be inside that bottle for sure. So is it possible to make the art beautiful and to make the context?”

Responding to Ben Tomoloju’s question about the distinction between rulers and leaders, Osundare said, “A ruler is interested in ruling, power. You are looking at the next election and you want to rule and rule and rule. You want to do everything in your power to make sure that you keep ruling.

“Rulers have no sympathy for the ruled. They treat them with disdain. That is what we are experiencing in Nigeria. Absolute disdain. You exercise disdain in all kinds of way: through calculated silence. People are being kidnapped under your rule and you don’t say a word.

When Olayiwola Adeniji asked Osundare how the issue of dislocation has affected his art in any form, he said “it is because I managed it well. But it is not unproblematic . I’m looking at the other side of the diapora. I have seen people suffer in the diaspora. I can’t remember any African writer that I have met in different parts of the world I have been to that is completely satisfied with living abroad.”

The scholar was full of praise for CORA for the sacrifices it had made over the years to promote the book culture in Nigeria and for celebrating him when he turned 50, 60 and 70. “I want to begin by thanking Cora for making this happen. I don’t know what offence I have committed. Why CORA is always on my trail. In 1997 when I turned 50, CORA sent somebody after me in Ibadan. And they said we want to to do a stampede. And what a stampede it was.

“I must thank this organization because I have never seen any organization like this in Nigeria. Nobody pays them, nobody praises them. And they have thrown themselves into this. And they have been doing it for so many years in a country as materialistic and philistine like Nigeria. This is not just a job you are doing, it is a vocation,” he said.

However, before Osundare read his poems, Toyin Akinosho, journalist, writer and publisher, Oil and Gas Report, had set the ball rolling by reading one of the poet’s poems, For Tai Solarin and delivering a brief speech stating why CORA organizes the book trek.

“And the idea was that when you are selling books that is not necessarily engaging anybody. When you have the author’s physical presence, reading excerpts from his own work, discussing the book and getting feedbacks, that is the whole idea. And a lot of books in Nigeria don’t get to do that. That is probably part of the reason why a lot of people don’t get to know about these books,

“The book reading idea is a very popular one elsewhere in the world. So we say ‘Oh people are not reading.’ But we also don’t know that people don’t even know what books are out there. There is a lot of exhibitions in Lagos. There is a lot of concerts in Lagos. Those are promotions. The book reading is the main promotion of books. So where are we at this point? So we think it is one of the most powerful tools … In a library you sit by yourself, at book clubs you discuss the books and wonder why the author wrote what he did. But nothing beats a book reading, an event in which an author sits with readers in a room. You get the chance to interrogate the source of ideas of the book,” Akinosho said

It was an evening of poetry, songs, dance and laughter. Dagga Tolar, poet and activist, set the tone of the literary event with a scintillating poetry performance, while Akeem Lasisi, poet and journalist, alongside his retinue of dancers, singers and drummers, also regaled the audience with his performance.