Without Buhari Nigeria would have been in crisis– Ngige 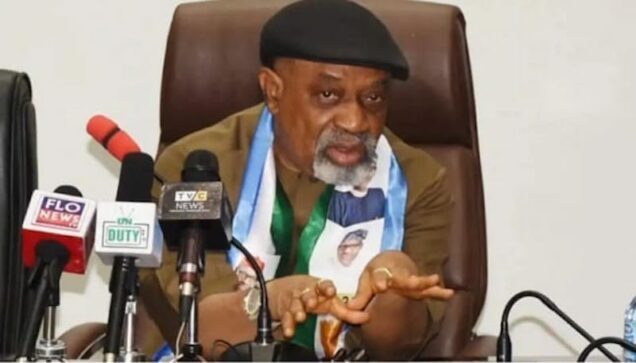 Sen. Chris Ngige, the Minister of Labour and Employment said if not because of President Muhammadu Buhari’s leadership style, Nigeria would have been in severe crises.

Ngige therefore described leadership as very critical to the survival of any human society.

Ngige said this after his induction as a Distinguished Honorary Fellow of the Institute of Leadership, Entrepreneurship and Corporate Governance (INSLEC) on Wednesday in Abuja.

INSLEC is a leading global professional body of both present and aspiring leaders, entrepreneurs and people in corporate governance.

Ngige said Nigeria is passing through hard times not because of the current government, but as a result of poor planning over the years.

According to him, a good leader must be visionary, see things others are not seeing and things that can be projected futuristically and bring them out for implementation.

“A good leader must be an implementation man; he should be knowledgeable, because after the vision, he will dissect and crystallise them; he should be a jack of all trades and master of all.

“He must also be courageous to implement hard decisions. If you don’t implement courageously, some of the visions will die or will not be implemented for the good of all.

“He must also be compassionate, knowing when to tamper justice with mercy, to show the human part of him.

“He should exude milk of human kindness. I know that our country is passing through a very rough time now because we have not planned well. It is not this administration.

”We know we were all dependent on oil. So, when oil prices came crashing and when security issues arose, disrupting production, we were caught napping.

“Because of that we went into recession. Later on COVID-19 forced us to go into a second recession. We are not yet out of the woods.

“We thank God. I am part of this government. I know that if we don’t have the kind of leader that we have, who is strong like President Muhammadu Bihari, the experience of Nigeria would have been like that of Venezuela,” he said.

Ngige said that the citizens of Nigeria would have spilled into the Cameroons, Niger and other places as refugees. We were looking forward to it. But he forced us all to go into agriculture.

”We made agriculture the first signature programme of the administration and provided food security so that we can eat whatever we grow here,”he said.

He noted that Nigeria had stopped the importation of rice, sorghum, millet, tomatoes and other things hitherto imported, all of which were dependent on the scarce foreign exchange.

According to him, the country’s GDP grew by 5.01 per cent in fourth quarter 2021, the highest in the last seven years, marking three consecutive quarters of growth, following the negative growths recorded in the second and third quarters of 2020.

“Services provided the lead, followed by agriculture, even though it had a deep and then, followed by Information and Communication Technology (ICT).

“So, we have to be grateful to the government and our leader, President Muhammadu Buhari, for standing firm that we will not import food anymore here.

”Even if he didn’t stand firm, we didn’t have the money anymore to start importing potatoes, tooth pick, chocolate and others,” he said.

Ngige, however, dedicated the fellowship to the ordinary Nigerians, saying that he believed in the have-nots and would continue to fight for them wherever he found himself.

He commended the institute and chairman of the governing board for the fellowship and pledged to be a good member, not only in terms of participation, but also loyalty and obedience to the institute.

Earlier, Prof. Gabriel Emecheta, President/Chairman of the council said the decision to elect Ngige as a Distinguished Honorary Fellow of the INSLEC spoke volumes about his pristine and differentiated worth as a leader, mentor and bridge builder.

The Chairman, Business and Development Committee of INSLEC, Chief O’tega Emerhor, while expressing gratitude to Ngige for accepting to be a member, praised him for imbibing wholeheartedly the spirit of the institute.

“We have been following your antecedents and what you are doing in the ministry and what you did as Governor in Anambra State.

”We appreciate your joining the institute and admit that with your brand name, the institute will make tremendous progress,” he said.