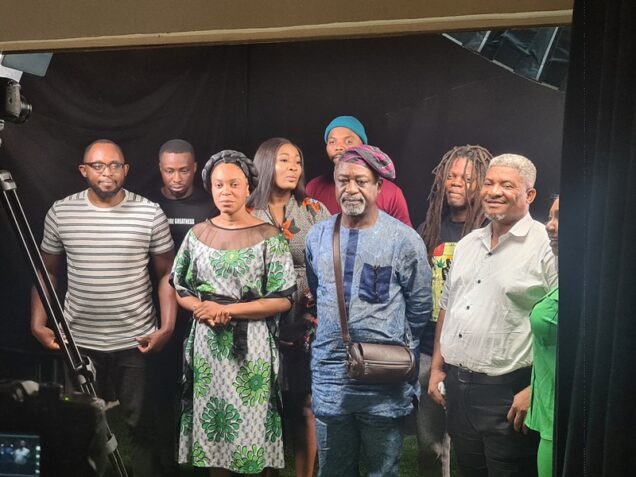 The cast of Fix Politics

When popular spoken word and performance artist Dike Chukwumerije published his poem, Fix the Politics, in 2020, it was borne out of his desire to inspire Nigerians to take active part in politics and choose who governs them in order to create social change.

“Until they are there in the highest Office/ Men and women with a heart for selfless service/ No region, no religion – just commitment to Nation…/Until we elect them, we labour in vain,” the poem concludes.

However two years on, Kininso Koncepts Production, a creative/cultural hub has adapted it into a movie entitled Fix Politics. And this is indeed timely as the nation is just few months away from the 2023 General elections.

The film, produced with the support of the Centre for Information Technology and Development and the MacArthur Foundation was screened on Friday via Zoom before a selected audience as part of preview session before its formal release.

According to a statement by Kinonso Koncepts Production Nigeria, Nigeria is at its electioneering season and as a timely project, Fix Politics aims to sensitize and create awareness for the citizens, particularly the youth and the government on the part they must play as stakeholders to curbing these issues and we must start now.

When TheNEWS asked the director of the film Joshua Alabi what the movie is about, he said: “The film is actually an original poem written by Dike Chukwumerije and it basically talks about tribalism, corruption, bad governance and what we do about our nonchalant attitude towards issues of governance and politics. It also talks about the issues of politicians in office who do nothing but sit there making money, publishing white papers and riding expensive SUVs.

“We are just asking on a general note that since 2023 is just a few months from now, are you prepared to take on these responsibilities? What do we want to do? Do we want to run away from this country? Or some of us want to stay and do something at the grassroots? We all can’t be presidents or governors. So what do you intend to do? What is your role? Or what do you think is your role?” Alabi said during the preview screening session.

Alabi also said since the movie is geared towards conscientizing the citizens and raising their social awareness, it won’t be restricted only to the cinemas.

“It is going to be on the social media space. We can have it on our phones. It is not a film that is for the cinema. It is what we want everyone to be able to watch any time to remind themselves of the roles they need to play. It it works, the onus is on us. If it doesn’t it is on us. We have our individual roles to play. It would be on WhatsApp, Instagram and YouTube. It would be on every platform,” he maintained.

At the preview screening session, the movie had a dramatic and poetic start as each of the cast took turns to recite parts of the poem, thus giving the audience insights into what they were about to watch.

Kininso Koncepts Production has in the past 10 years produced theatre and performance contents for corporate bodies and NGO/Chaos on major issues such as domestic violence, rape, insurgency, child trafficking, Justice and security, peace and reconciliation, health and safety, anti-corruption, malaria, human rights and gender equality. These works have served as catalyst for social orientation especially as it concerns Nigerians and youths.