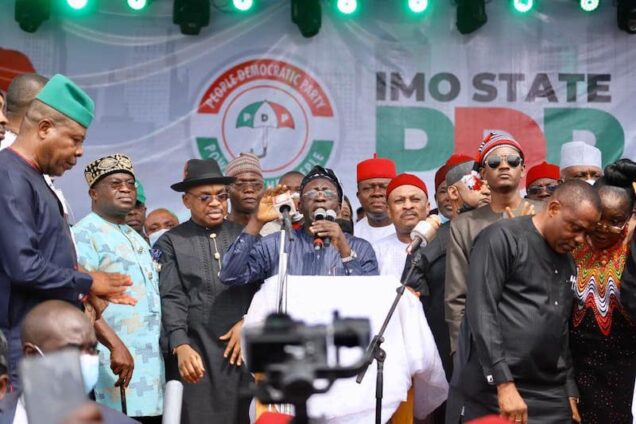 The Buhari Media Organisation (BMO) has urged Nigerians to take notice of the “open and shameless” endorsement of the activities of the proscribed secessionist group, Indigenous People of Biafra (IPOB) by the Peoples Democratic Party (PDP).

The group said in a statement signed by its Chairman Niyi Akinsiju that the endorsement is glaring evidence of the link between the opposition party and the proscribed group which had since been tagged a terrorist organization by the courts.

The group said: “Our attention has been drawn to comments made by the National Chairman of the Peoples Democratic Party, Iyorchia Ayu recently in Owerri, Imo state, on IPOB and its activities in the South East region.

“We view Ayu’s speech as unbecoming from a man who was once a Senate President, but it is also a sign of the symbiotic relationship between the struggling opposition party and a group that has for years launched terrorist attacks in a part of the country.

“It is more or less a Freudian slip from someone who knows that IPOB elements are PDP sympathisers whose activities are more pronounced in states that do not have governors elected on its platform and are bent on making things difficult for the President Muhammadu Buhari-led administration.

“By seeking to compare IPOB activities to problems that sparked agitation in the Niger Delta region, the PDP chairman did no justice to his academic credentials because the issues are not the same.

“More worrying is Ayu’s attempt to discredit a national institution when he said ‘we will not use DSS to kill your people as the APC-led administration did’.

“We believe that Ayu needs to apologize to Nigeria and Nigerians for playing politics with an agitation that many people are not comfortable with”.

“Even as we speak, members of this group are still killing innocent Nigerians in the process of enforcing a hare-brained stay-at-home order that was first declared by its leadership in the aftermath of the arrest of IPOB founder, Nnamdi Kanu.

“In case Ayu pretends not to know, the federal government proscribed IPOB in 2017 after its violent activities became intolerable and the courts in January 2018 affirmed that it was indeed a terror group.

“So we are constrained to ask what piece of advice Ayu has offered his PDP colleague on IPOB matters, especially as he (Wike) has shown more intolerance for the secessionist group than even governors in the South East.

“Besides, we find it ironic that a party that did little or nothing for the region in 16 years is accusing a party that has done more in almost seven years of uplifting the region”.

BMO noted that the current PDP leadership is not different from the previous ones and urged Nigerians to ignore their political antics.