Justice for Vincent: Father of sodomised, dead boy cries out 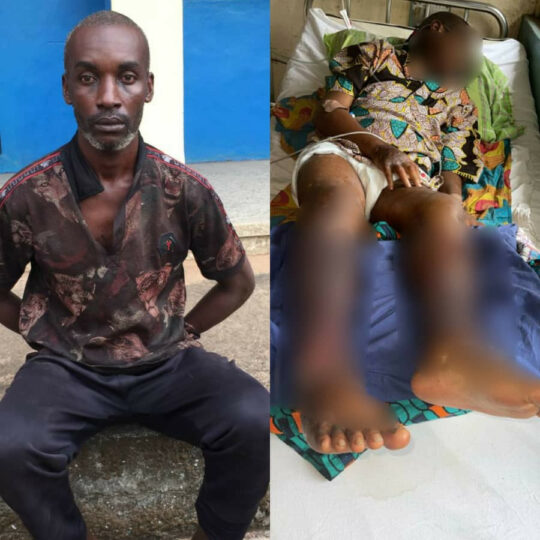 Ovie Oktogbo the rapist and one of his victims Vincent Ugiagbe

The Father of a 13-year-old boy, who was sodomized and later died, Mr. Vincent Ugiagbe, is seeking justice for his son.

The minor was reported to have been allegedly sodomized by a security man in Uwasota area of Benin City.

Ugiagbe, who confirmed the death of his son to newsmen, said: ”my son’s promising future has been cut short.

”My son had a bright future. He was very intelligent. Now all that has been taken from me because of the act of this irresponsible person.

“I made frantic efforts to save the life of my son. I borrowed from friends and commercial banks to defray the medical bills and he still passed on.

“I am calling on the government for justice for my son. I don’t want him to die in vain. I want him (the perpetrator) to face the full wrath of the law”.

The police in Edo had yesterday confirmed the arrest of a 43-year-old man identified as Ovie Oktogbo who allegedly specializes in sodomy.

The police spokesperson, Kontongs Bello said Oktogbo was arrested after one of his victims fell sick and told his parents how he was defiled by a man who uses bleaching cream as lubricant.

The police said: “On Feb 2, 2022, at about 1800hrs, the Police Command arrested Oktogbo, of No. 15 Ugboguhi Street Off Uwasota, Ugbowo, Benin City, an indigene of Delta, who is a father of three who also works as a security guard man in the area that specializes in sodomising children/ teenagers between the ages of 10 and 15.

“Preliminary investigation revealed that the rapist specializes in using N100 to N200 to lure his unsuspected victims who are children and teenagers between the ages of 10 to 15year in the area and have an unnatural carnal knowledge of them.

”Medical examination revealed that the victim’s liver and kidney were damaged as a result of a certain chemical contained in the bleaching creams.”

The police said Oktogbo confessed to having defiled nine boys in the area.

The police said that six out of the nine have already been identified and their parents also made formal complaints to the commissioner of police to that effect while three (3) out of the nine (9) children are yet to be identified.

He said the Commissioner Of Police in Edo, Philip Ogbadu, has assured the father of the victim that the suspect would be arraigned in court at the end of the investigation.