Putin is an aspiring Adolf Hitler, the West must stop him 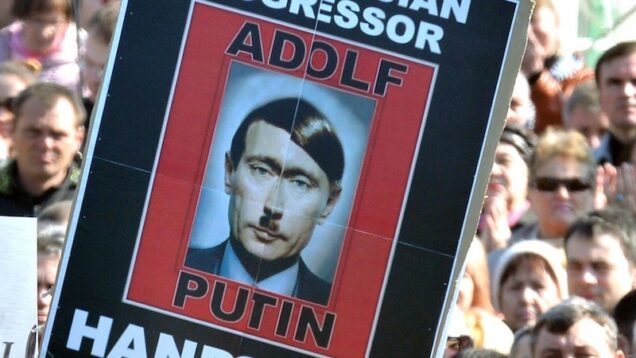 A caricature of Putin

Don’t take it from me. Take it from around the world. I discussed just yesterday how Romania’s largest newspaper has named him “Joseph Adolf Putin.” But it hardly stops there.

Here’s the Ukrainian government itself. Just take a look at graffiti scribbled in Moscow.

The comparisons between Putin and Hitler might seem hyperbolic. If you think this is just about Ukraine. But of course — it’s not, and it never was. As the Ukrainians themselves warn the rest of us today — today, they are coming for us. Tomorrow? They will come for you.

If you think that saying “Putin is an aspiring Hitler” is an exaggeration, then ask yourself if you ever thought you’d see pictures and videos like this — of shattered cities, streams of refugees, and citizen soldiers — in the heart of Europe. Ask yourself if you are in a position to label the comparison “hyperbolic” if the government of Ukraine, whose leader’s family died in the Holocaust, is comparing him to Hitler.

The Ukrainians are righter than they know. And we in the West are more foolish than we understand. Putin is this era’s Hitler precisely because he has a vision of an empire he wants to restore, rooted in the purity of blood, made of ubermen and subhumans. And the part that we in the West don’t seem to grasp is that he has already come for us, over and over again. That is how things got this bad.

After Ukraine? It will be the rest of the former Soviet Republics. Latvia, Lithuania, Moldova, Czechia, and Poland. Putin has already announced his desire, over and over again, to reconstitute a kind of Soviet Empire. What he really wants, as I’ve discussed, is a Third Reich. The first — Tsarist Russia. The second — the Soviet Union. The third one, in Putin’s vision, is a Russian Empire that stretches from Germany in the West to China in the East — and controls something like half to or more some of the world’s most critical resources.
On a dying planet, who controls the resources controls the world. That is Putin’s game. That is what is behind the Third Reich — and it’s buttressed by a kind of fanatical mythology of Russian supremacy in blood, a “bio-cosmic” life-force superior to the rest of the world, especially the weak, decadent West.

Please. Think on that last paragraph until you really understand it. There is a lot there. Politics, philosophy, economics — it’s all contained in Putin’s motivations. To really understand what he is after, the idea of new Third Reich is essential. I’m not kidding about that. I know it sounds a little fantastical to American eyes. So if it does, take a second to remember that Putin just invaded a country of forty million innocent people by land, sea, and air. This is not a joke.

We failed to stop it because we don’t understand it. Yes, intelligence “warned” that Putin would invade. But did you notice how our leaders didn’t act until it was too late? Why didn’t they slap sanctions on the oligarchs a month ago? Provocative? But the dirty money was dirty then, too, wasn’t it? Is it any cleaner now that Ukrainian blood also stains it? Our leaders didn’t deter Putin then. They should have. And that is the mistake we keep making.

If you “disagree” with that — and I’m sure many of you do, then ask yourself — how does appeasement work out historically? What effect does it have? So why have let Putin get away with it for so long?
The bitter truth isn’t that Putin “is” Hitler. It’s that we let him become Hitler. Right before our eyes. Our inaction is what allowed him to become the war criminal and world-wrecker that he is now.
It’s not just that “Putin attacked Ukraine, and now he’s coming for the West.” That is backwards. Putin attacked Ukraine because he already came for the West — and won. That is what I mean when I say “we let Putin become this world-wrecking demagogue.”

Let’s go through a series of facts — these are facts, and none of them are up for debate.

Trump became President because of Putin. Russian military intelligence hacked Hillary’s emails — yes, really — the American media was foolish enough to fall for it, and the result was that her bid for President imploded. Putin made Trump president. That’s before we get to the propaganda spread on Facebook, and the radicalisation of the right wing — all things that have been linked not just to Russian money, but to literal Russian models of “firehose” propaganda.

We let Putin interfere in an American Presidential election — and get away with it. Who did? The entire West did, not to mention America. Trump got away with it, and still is — but he was just a puppet, really, doing Putin’s bidding. Like trying to break America up with NATO.

Now do you see why Putin installed Trump — and then Trump tried to break America up with NATO and Europe? It was all so Putin could build his empire. This move — the invasion of Ukraine and beyond, the actual military attack — is something that Putin has been planning for and setting up for years. It goes much, much deeper than we imagine. It’s not random. It’s not madness. It is the endgame of a long, long game — which included interfering in an American election.
Imagine if we’d held Putin accountable then. Do you think that Ukraine would be facing this, now? Probably not. Again — are you beginning to see the real stakes here?

The next way that Putin already came for us, the West, was Brexit. Brexit was never just about Britain. It was about breaking Britain up with the EU. Sowing hate, which would weaken the entire West. So — and again, this is a fact — with Russian money, Russian methods of propaganda, influence from figures like Farage who defended Russia’s interests over and over again mysteriously…Brexit happened. The average Brit was radicalized, incredibly, into hating their European friends and allies. The EU was stunned that Brits had betrayed them and hated them.

How did all this happen? Brexit was, just like Trump’s election, backed, funded, and helped along by Russia. This much was obvious to anyone in the least familiar with Russian propaganda and intelligence operations. And the evidence has come out since then — and keeps coming out — that yes, all this was really true.

So. Russia interfered in a British referendum. One that would shape the future of its relations with the rest of the West. And nobody even noticed very much. It was barely investigated. Certainly, nobody paid a price. Do you see how utterly incredible this is? Putin got away with it. Over and over again. And so obviously, the moment came, when, having destabilised the West so thoroughly, he was ready for the next step of the plan — invading Europe, to seize its territory and resources for his new Third Reich, in which genetically superior Russians need “lebensraum,” room to live.

Let me restate all of that so you really get it.

Russia interfered in the West’s most significant political institution — America’s Presidential election. It interfered in the second most signifiant political event of the decade for the West — Brexit. It’s intervention was decisive in both. It literally shaped and molded both exactly the way it wanted. To serve its interests. To weaken the West, sow discord, dilute its resolve, crumble its unity and will from the inside.

Putin got away with all that. Imagine that I told you someone could interfere decisively in an American election and get away with it. In a British referendum. A decade ago, you would have been incredulous. You’d probably have laughed at the idea. And yet that’s exactly what happened. How bad is that? This is even more than Hitler got away with. No wonder Putin thought the West was weak and feeble. It acted like it over and over again — and let him get away with it.

What could we have done, you might ask? Well, anything at all would have been a good start. Mostly, we’re still in denial in the West that the malign hand of Russia has shaped our politics for the last decade now, with disinformation, propaganda, or worse, the outright intervention of Trump’s election and Brexit. Anything, from simply calling it out, to actively trying to root it out.

Imagine that we’d said, then — wait, Russia interfered in our most significant political institutions and processes. You know? It’s time for sanctions. And we’d sanctioned all the oligarchs then. We wouldn’t be here now. We would have weakened Putin’s internal support, by taking money away from his oligarchs, who he needs to tap for the resources to make war. Putin would have been set back a decade in his plan for world — or at least European — domination. Ukraine wouldn’t be under attack now.

But we did nothing — and that is why we are where we are now. We let Putin become this age’s Hitler.

And we had better stop him here and now.

Ukrainians aren’t just fighting for themselves. They’re fighting for all of us. That is the sense in which we’re all Ukraine. They’re the ones at greatest immediate risk, of course. Their cities being ripped apart by bombs and missiles. Their bravery and courage and defiance is incredible and amazing. Moving. It has touched the entire world, and made a legend of a nation. But it moves us for a reason.

Ukraine is fighting for all of us. Because we are all under attack by Russia. All of us. American, whose Presidential election was interfered in by Russia. Britain, who was broken up with Europe. The entire West, from France to Germany to Italy right back to America, where Russian money and influence and propaganda is behind a resurgent far right, whose goal is, wait for it, to defend Russia.

It’s not just Ukraine. The entire West is under attack by Russia. Interfering in a Presidential election is an attack — a major, major one. Interfering in a referendum that decides the future of Western relations is an attack — an enormous one. Destabilizing the West’s polities and trying to tilt them hard right, by paying off the right journalists, by paying for outright influence, through naked propaganda, by effectively buying off figures like Zuck and companies like Facebook and Twitter — that’s an attack, too, a huge one. These are all attacks.

They are sophisticated, modern attacks. And they are also ancient ones. Remember the Trojan Horse? We welcomed it in. Russia’s. Do you know why the Trojans let it in? It was a fine horse, an offering to Athena, to their gods. Russia’s horse was a fine one, too. It glittered with money and wealth. It shone with power and influence. We opened the gates.

And the soldiers spilled out. Right into the heart of Europe. From the gates of Kyiv to the Dnieper river.

We let Putin become this age’s Hitler. We welcomed his Trojan horse in. But it always an attack, even if it glittered and shone. What else is interfering in a Western Presidential election and an era-defining referendum? Trying to destabilise it’s entire political balance with fascism and hate? It was always an attack. Now the soldiers are spilling out.

We are all Ukraine, my friends. Their bravery and courage inspires us because we are all in the same fight now. We have been for a long time. Let this be the moment we finally understand it, across an enfeebled, divided West, which, for, too long, only greedily saw the how Russia’s Trojan Horse glittered — not the deadly menace inside.

*Umair Haque first published this in Medium on 26 February