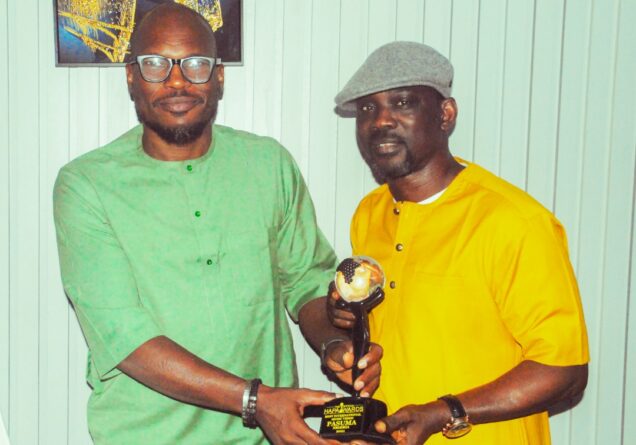 Organizers of the Hollywood and African Prestigious Awards (HAPAwards) has presented the trophy for the “Best International Music Video 2021” category to Nigerian Fuji musician and songwriter, Wasiu Alabi popularly known as PASUMA.

The organisers also used the unique opportunity to attend a groundbreaking ceremony of the WAKANDA-One city initiative in Ghana.

The award presentation led by Producer and African Representative of HAPAwards, Mr. Adeola Odunowo, was held at the singer homestead in Lagos.

The artist while expressing his gratitude to the award organizers said it was an amazing experience to be a part of the last edition at the Orpheum Theatre in Los Angeles, California.

“Winning this category only goes to show that I am still relevant in the music industry and I desire to even contribute more than I have. God bless you all,” PASUMA said

Other winners from Nigeria at the 5th edition of Hollywood and African Prestigious Awards (HAPAwards) include Lateef Adedimeji, Etinosa Idemudia, Ayoola Ayoola and UBA’s REDTV Productions with many more across Africa.

The 2022 Edition of HAPAwards kicked off with a special attendance at the official launch of WAKANDA-One city in Ghana – an initiative of the African Diaspora Development Institute (ADDI).

Speaking during an interactive session, the Founder and Executive Producer of HAPAwards, Ms. Tina Weisinger said, “There is no better time to unite the Black race as it’s evident that Africa is the last frontier of human development. Our platform will continue to support and encourage talents and creativity across the globe.”

Her Excellency, Dr. Arikana Chihombori Quaw, the Chairperson of ADDI, noted that the initiative was born out of a necessity to create a one-stop shop for everything African.

The major drivers of ADDI believe it is imperative that the children of Africa in the Diaspora return back home to Africa and join their brothers and sisters to build a Continent of the future.