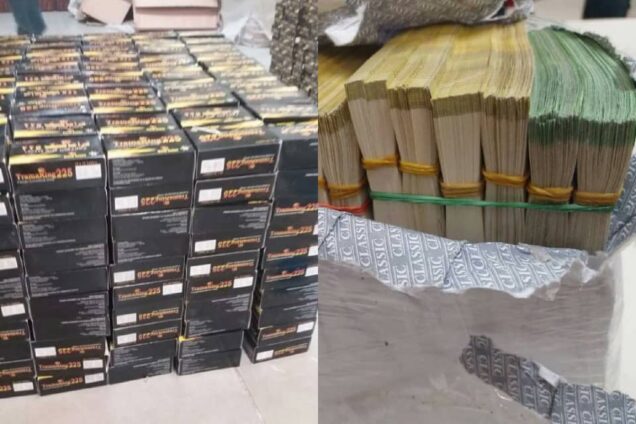 The seized tramadol and Euros cash

He said a suspect, Nwadu Ekene Christian was arrested in connection with the seizure.”

“On the same day, a female passenger, Ms. Ayeki Happy who arrived the airport from Italy on Turkish Airline flight was arrested with 809,850 Euros cash concealed in her luggage.

This was four days after another lady, Precious Idahagbon was arrested with 740,000 Euros cash hidden in her luggage and undeclared upon her arrival at the airport from Vienna, Austria via Istanbul, Turkey.

Both cash seizures are currently under investigation to establish if they are proceeds of drug business,” he said.

Babafemi added that in Kano, a 34-year-old Nasiru Abdulrahman was arrested with 476kg of Cannabis at Kwanar Dan Gora, Kiru local government area of the state on Friday 25th Feb.

He said in Adamawa, 4,000 tablets of Tramadol 225mg were seized from Abdulmuminu Abubakar, 24, who was arrested at Gidan Madara, Mubi North LGA on Tuesday 22nd Feb while travelling on a motorcycle to deliver the drugs in Bukula, Cameroon Republic.

He claimed another suspect, Fahad Mohammed, 19, gave the consignment to him. Fahad was later arrested in a follow up operation at his home in Kasuwan Borkono Area of Mubi town.