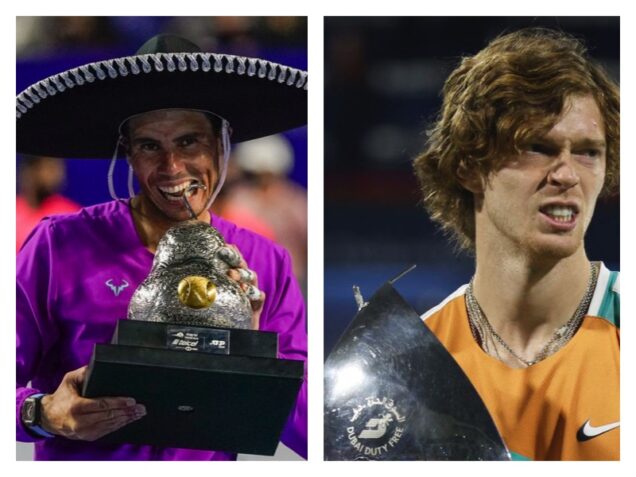 Russia’s Andrey Rublev and Rafa Nadal all triumphed Saturday claiming ATP titles, with Nadal winning in Acapulco, as the oldest player to do so.

Rublev captured his second straight title and 10th of his career with a 6-3, 6-4 win Saturday at the Dubai Duty Free Tennis Championships in the United Arab Emirates.

He beat unseeded Czech Jiri Vesely, who defeated Novak Djokovic in the quarter-finals.

Rublev, the No. 2 seed, won three consecutive three-set matches before putting away Vesely in 80 minutes.

He fired 13 aces and saved three of four break points to follow up last week’s triumph in Marseilles, France.

This is the fifth ATP 500 tournament title for Rublev, who finished with 28 winners and just eight unforced errors.

Vesely fell short of becoming the first qualifier to win in Dubai.

Rafael Nadal continued his perfect start to 2021 by winning his third consecutive tournament, beating sixth-seeded Cameron Norrie of Great Britain 6-4, 6-4 in the final at Acapulco, Mexico.

The fourth-seeded Spaniard previously prevailed in the Melbourne Australia Summer Set and the Australian Open.

The championship is the 91st of Nadal’s career. Nadal holds the all-time record for major titles with 21.

Nadal got the lone service break of the first set for a 3-2 lead, and he never faced a break point in the set.

The players exchanged service breaks in the opening two games of the second set.

Nadal broke twice more in the middle of the set before closing out the championship on his second attempt of serving for the match.