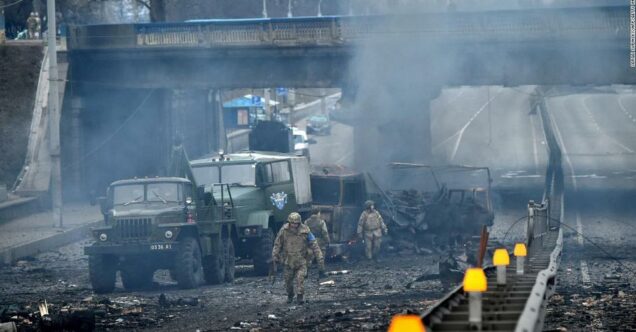 Russian forces on the 4th day of their invasion, have attacked oil and gas facilities in Ukraine, sparking huge explosions, officials said on Sunday.

The United States and its European partners said they also would impose restrictions on Russia’s central bank to limit its ability to support the rouble and finance Putin’s war effort.

“We are resolved to continue imposing costs on Russia that will further isolate Russia from the international financial system and our economies,” said a statement from the United States, France, Germany, Canada, Italy, Britain and the European Commission.

Ukrainian forces were holding off Russian troops advancing on the capital, Kyiv, President Volodymyr Zelenskiy said as the biggest assault on a European state since World War Two entered its fourth day.

There was also of heavy fighting for Ukraine’s second city, Kharkiv, in the northeast, where Russian troops blew up a natural gas pipeline, a Ukrainian state agency said. The gas blast there sent a mushroom cloud up into the darkness.

“The enemy wants to destroy everything,” said the mayor of Vasylkiv, Natalia Balasinovich.

Russian-backed separatists in the eastern province of Luhansk said a Ukrainian missile had blown an oil terminal in the town of Rovenky.

Reuters witnesses in Kyiv reported occasional blasts and gunfire in the city on Saturday night but it was not clear where this was coming from.

“We have withstood and are successfully repelling enemy attacks. The fighting goes on,” Zelenskiy said in a video message from the streets of Kyiv posted on his social media.