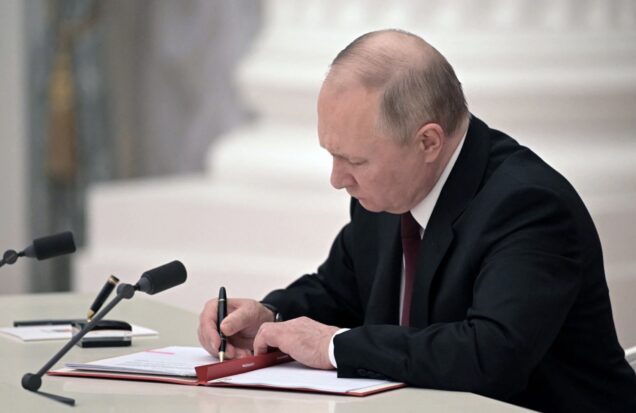 He said the move was a response to “aggressive statements” by leading NATO powers and economic sanctions by the West.

The directive means Putin has ordered Russia’s nuclear weapons prepared for increased readiness to launch, suggesting that tensions could boil over into a nuclear war.

U.S. Ambassador to the United Nations Linda Thomas-Greenfield said Sunday that Putin’s decision indicates the Russian president is “continuing to escalate” the war in Ukraine in a way that is “unacceptable.”

At the same time, the office of Ukrainian President Volodymyr Zelenskiy said a delegation would meet with Russian officials for talks, near the Belarus border.

Thomas-Greenfield expressed hope for prospective peace talks. “We’ll look forward to what comes out of those discussions,” she told CNN’s “State of the Union.”

Putin’s move came as Russian troops entered Ukraine’s second-largest city of Kharkiv and fighting is underway in the streets, according to the Associated Press.

Videos posted on Ukrainian media and social networks showed Russian vehicles moving across Kharkiv and a light vehicle burning on the street. Residents were urged to stay inside.

The troops in Kharkiv arrived after Russia unleashed a wave of attacks on Ukraine targeting airfields and fuel facilities.

President Volodymyr Zelenskyy’s office said one of the blasts was near the Zhuliany airport and the other blast hit an oil depot about 25 miles south of the capital, according to the mayor of Vasylkiv via the AP.

Russian forces also blew up a gas pipeline in Kharkiv, according to the Ukrainian president’s office.

The UN has confirmed at least 240 civilian casualties, including at least 64 people killed in the fighting in Ukraine since Russia’s invasion on Thursday, according to AP.

The UN believes the toll may be “considerably higher.”

More than 200,000 people have fled Ukraine to neighboring countries. UN officials believe up to 4 million people could leave if fighting continues.

Meanwhile, the United States and its European allies agreed to remove “selected” Russian banks from the international SWIFT messaging system, which allows for the movement of financial transactions.