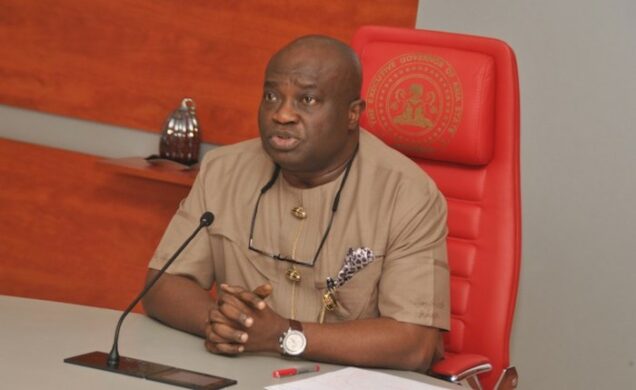 The Abia government, on Monday apologized to Gombe State government over the attack at the new Abia Cattle Market in Omumauzo, Ukwa West Local Government area of the state.

Bandits had invaded the market on February 17 and killed eight traders and some cows.

Gov. Okezie Ikpeazu of Abia represented by Kalu Ogbu IV, the paramount ruler of Abiriba Kingdom in Abia State made the apology during a visit to Gov Inuwa Yahaya.

The governor described the event as “sad and deeply regrettable by Abia people.”

Ikpeazu while briefing newsmen in Gombe, stated that the visit was to “say we are sorry and to express our sympathy and condolence of the people and government of Abia State.

“It was a very sad thing and we do not know how to explain it but it was the handiwork of misguided and ill-advised fellows.”

The governor said that the state government was working to ensure that all those involved in the attack were caught and made to face the wrath of the law.

He said a new location had been given to the traders to do their business comfortably with adequate provision of security and other social amenities.

He stated that in spite of some of the challenges facing the country, there was hope for Nigeria.

He commended his counterpart in Gombe State, Gov. Inuwa Yahaya and the leadership of Cattle Dealers of Nigeria for showing strong leadership since the event took place.

On his part, Gov. Yahaya said the meeting with the delegation was to “maintain the bridge so that it does not collapse.”

On his part, Yahuza Yusuf, the acting National President of the Amalgamated Cattle Dealers Association of Nigeria appreciated Ikpeazu for his response following the attacks.

According to Yusuf, Ikpeazu has responded to their request to relocate the market to a safer place and also supported the traders who lost their cows.

He said that the governor had promised to pay N2 million to the families of the deceased, adding the pledge had not been fulfilled.

He commended the governor for his leadership role in supporting his members, adding that Ikpeazu was the only governor in the South East who had done that.