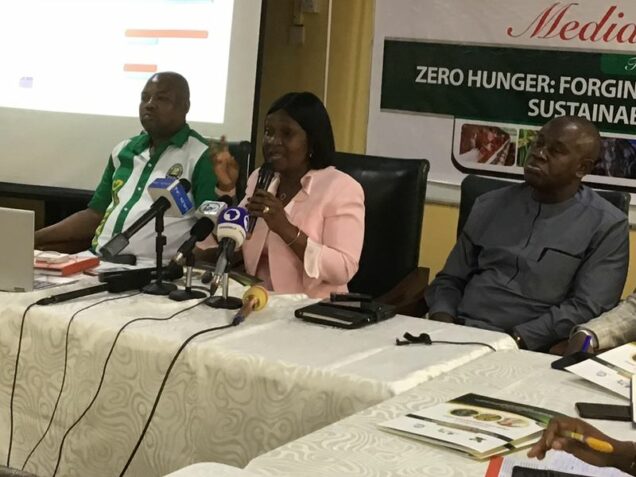 The World Bank project kicked off in 2017 targeted at 10,000 beneficiaries, but Sagoe-Oviebo said they have exceeded expectation with 17,467 farmers empowered.

Speaking at a media chat at the at the Lagos APPEALS Coordinating office, Oko-Oba, Agege, Lagos, she said the project is $200 million World Bank Supported project in six states, Lagos, Cross-River, Enugu, Kaduna, kano and Kogi.

According to Sagoe-Oviebo, the farmers were supported in three value chains, poultry, aquaculture and rice, adding that the beneficiaries included farmers who benefitted directly and indirectly from the project since 2017.

She said the project had continued to promote productivity enhancement technologies and value addition through the demonstration of improved technologies.

She disclosed that of the number, 7, 533 were trained, 3,950 were supported with farm inputs and equipment while 1,786 women and youths also benefited with some of them receiving startup grants.

In her words: “The APPEALS project has created 12,350 jobs across all its activities and also reduced the likelihood of being poor by five and 10 per cent.

“The project has de- silted various drainage channels aqua for aquaculture farmers around Erunwen, Adamo, Igbe, Ijede , Omitoro, Parafa in Ikorodun and Ebute-Afuye, Epe and others.

“There has been a significant increase in the three value chains of the project in the state which are aquaculture, poultry and rice with improved technologies.”

Sagoe-Oviebo revealed that the rice value chain had achieved a lot with the new Ofada strain which had multiple yields for the farmers, as the quality of rice had been greatly enhanced.

She said that the Ofada rice could now be compared to the Basmati rice because of its long strain, single colour and taste, saying that the products in rice and aquaculture value chains had met international market standard and presently enjoying export opportunities.

The Lagos APPEALS Coordinator stated that the project also supported some farmers with colour sorting machines to make the Ofada rice presentable and marketable, adding that the project’s target was to make one of its products get into the international market, saying that it had been able to achieve this in rice and aquaculture.

According to her, the project also supported farmers in the poultry value chain with pelletised feeds, nipple drinkers and probiotics, as well as helped them to now produce poultry all year round, instead of seasonal farming.

Sagoe-Oviebo said that in 2022, the project would complete the recently approved construction of 15 cottage industries approved in 15 different areas of the state as well as purchase transformers for farmers in Araga, Epe.

She disclosed that the APPEALS project, this year, would be boosting farmers’ capacity to produce egg powder and also fish canning technology for tilapia.

“We will support some farmers with transformers, while more roads will be constructed for farm estates as well as jetty interventions at Afowo cage culture, Epe. We have a lot going on this year and a number of business plans will be approved for farmers,” she added.

Sagoe-Oviebo appealed to farmers to own the project as it entered the final implementing year, adding that Governor Babajide Sanwo-Olu would continue to support the project even after it had ended.

Seyi Ladega, a beneficiary of the programme and a poultry farmer from Erikorodo Poultry Association, Ikorodu, said the project trained farmers in the estate on new technology for broiler production and business plan.

She said that the association and other farmers in Ikorodu would transform the area to a broiler production hub in West Africa by 2023, through the support of the APPEALS project.