Tinubu, Aregbesola set to reconcile in interest of Osun, Yorubaland 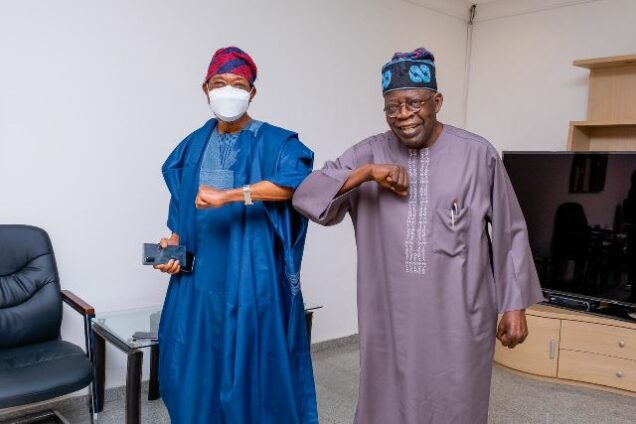 There were strong indications last night that the feud between the National Leader of the All Progressives Congress (APC), Asiwaju Bola Tinubu, and Minister of Interior, Ogbeni Rauf Aregbesola, might be over earlier than it could be imagined.

Highly placed sources within the privy to the reconciliation efforts revealed that concerned stakeholders in Yorubaland, the ruling party and some influential leaders of thought in Nigeria have waded in and are already exploring ways to broker a truce between the two erstwhile good friends.

According to a source, who was in the know of the reconciliation and peace initiative, of concern in particular to the peacemakers was the implications for the victory of the APC in the upcoming governorship election in Osun State and of course the overall best interest of the Yoruba race ahead of the 2023 general elections.

“I can say authoritatively that reconciliation efforts to close the rank between Asiwaju Bola Ahmed Tinubu and Ogbeni Rauf Aregbesola are underway, and already beginning to yield positive results. I am confident that sooner than expected, the two APC chieftains will embrace each other and continue to work together as brothers,” the source said.

The source added that, to underline how important the peace move has become, the concerned stakeholders have given the reconciliation of Tinubu and Aregbesola top priority.

“The truce is being arranged to ensure that the matter is put to rest as fast as possible in the overall interest of the Yoruba people and the APC victory in the forthcoming Osun governorship election. It is a top priority, and there is no doubt that the reconciliation will pacify the aggrieved parties,” the source added.